Residents report an increase in scams throughout the community. Most notably, a resident received a call stating a family member was involved in a motor vehicle crash and was in need of money for injuries requiring immediate medical attention, bond money, or legal issues or representation. They were told the request for money was urgent and the money needed to be wired in a timely manner. Chatham County Police Department is aware of the attempted scams and has initiated an investigation. Residents are urged to be very leery of anyone asking for money and know the red flags associated with most scams.

McAfee, Norton, Geek Squad, and other virus protection scams also continue to be an issue. Residents are urged to be very leery of unknown, unsolicited, and fake or compromised emails. Be extremely careful when providing anyone access to your computer.

The check reported missing last week was received by the intended party. Other mail previously reported missing by other residents appears to be part of a larger issue with a company changing their billing process.

On December 11, a resident received a notification of a package being delivered. They verified the package was in their mailbox but chose to leave the package in the mailbox until they returned home. Upon returning home, the package had been removed.

On December 11, a Patrol Officer discovered what appeared to be an unregistered and abandoned golf cart at the intersection of Landings Way South and Westcross Road. Shotgun shells and a knife were found in the golf cart and retrieved for safe keeping. A note was placed in the golf cart, and the owner was later identified as a resident of South Harbor who was visiting a resident.

On December 8, a Patrol Officer responded to a call regarding a golf cart partially submerged in a lagoon. The driver of the cart was not on the scene, but later identified and was not physically injured. The cart was returned to the owner, and a friend of the resident was made aware of the incident.

On December 9, a Patrol Officer responded to an incident involving juveniles yelling and cursing at another juvenile while driving down the street. The father of the victim knew the three juveniles involved, and he stated he would speak with their parents. No further incidents were reported.

On December 9, a Patrol Officer responded to a report of property damage. The resident believes a trash truck backed over bushes and broke a sprinkler head. The home is located in a cul-de-sac, and the damage did not appear to be intentional.

On December 9, a resident reported Christmas decorations had been overturned and pine straw displaced. No witnesses or suspects could be identified. Patrols were increased in the area, and no further incidents were reported. 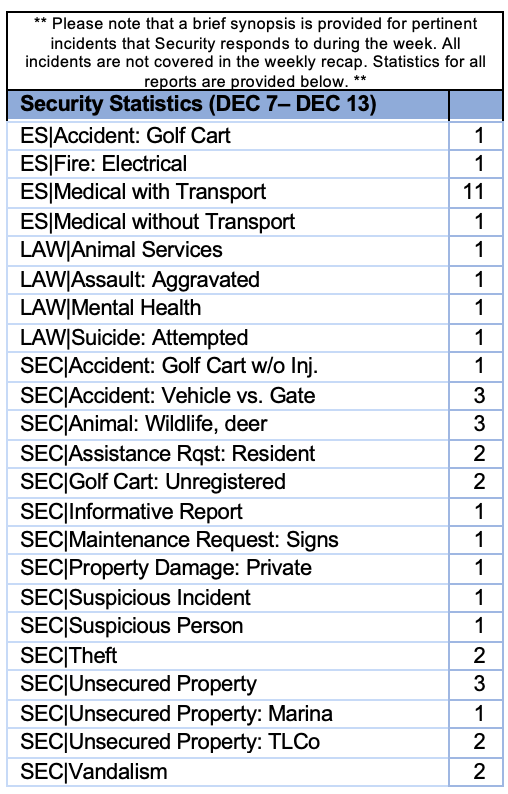 This article was originally published by The Landings Association on their website. Visit landings.org to read the original article. https://landings.org/news/2022/12/16/security-scene