Note: Toni noted that these are her memories and may not always match the facts. 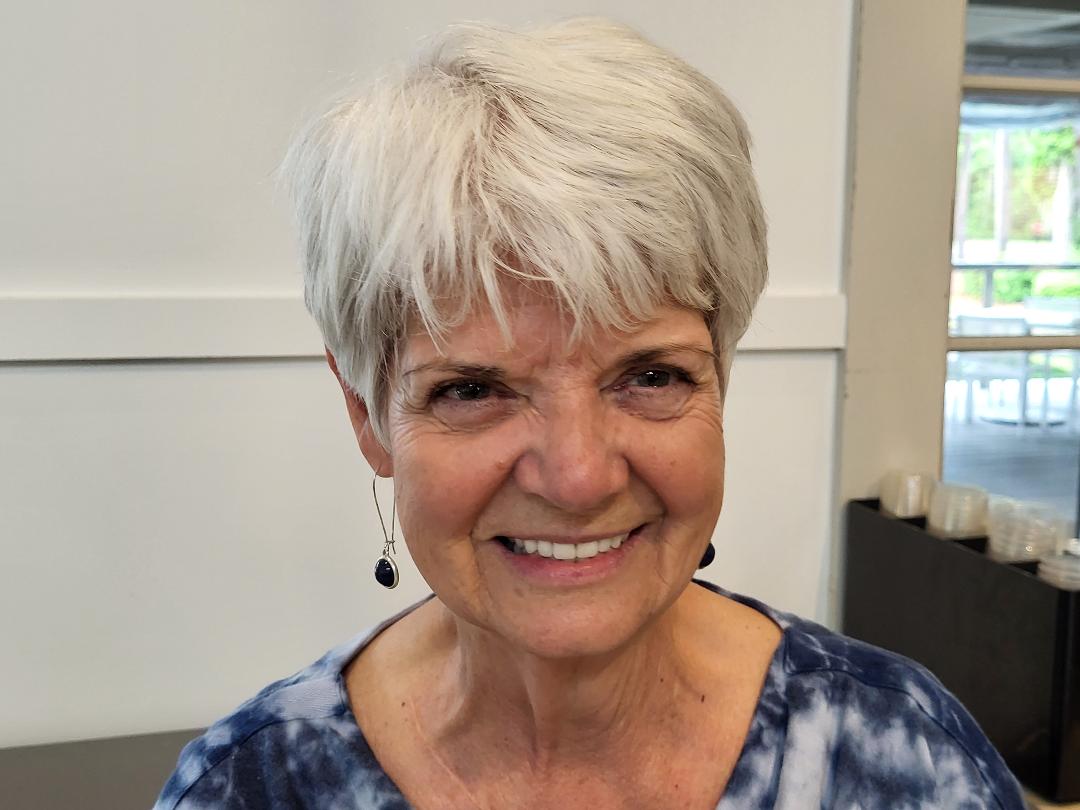 Toni Floyd (pictured at left) likes to talk about her time as a longtime Landings resident. She grew up in a military family and never lived in one place very long until she married two Savannahians, one that brought her to Savannah and one that kept her here. Toni and Ronnie Floyd built a home in The Landings in 1980.They raised their two daughters on Musgrove Lane in Marshwood (the only section, at that time), and she still lives there today. On my walking trips along one of the lagoons ending at Bartram, I had passed the house with the very interesting standing alligator statue, thought to myself how comical it was, and never knew that was the Floyd home. Toni now has five grandchildren located on Wilmington Island, and Charlotte, NC. But enough about her personal life; what does Toni remember about the early days of the Landings on Skidaway Island?

When asked about Landings Harbor, she noted that it was just called “The Marina” back then. She has seen changes as the number of dry stacks has grown and increased resident participation at summer events. When the Marshwood golf course began, it was first just nine holes, and then another nine were added. She was lucky enough to be in the group that walked around with Arnold Palmer when he came to open the back nine of Magnolia in December 1979. Her children were among the first to be in The Landings junior golf and tennis programs. There also was an early T-Ball league.

Toni worked for IBM, and her boss invited her to play the Marshwood course in 1975. As there was no signage or GPS and she was unfamiliar with the area, she kept driving on Ferguson to Burnside Island before backtracking and finding the Diamond Causeway. She was an hour late for the tee time, but the play was so casual back then that it wasn’t a big problem.

Toni remembers Hurricanes David (water everywhere) in 1979 and Hugo in 1989, which turned toward Charleston at the last minute. The Floyds had restaurants in Savannah, and Toni particularly recalls the mandatory evacuations during Hurricane Floyd in 1999. Longtime customers pitched in to cook chicken fingers, flip burgers and make milkshakes. Throughout the night, power crews and police knocked on the door and breakfast was cooked. Oglethorpe Speedway drivers, who were regular customers and friends from The Landings’ golf women bussed tables and made tea, and their husbands taped windows on their way out of town. This really demonstrated the sense of community back then. 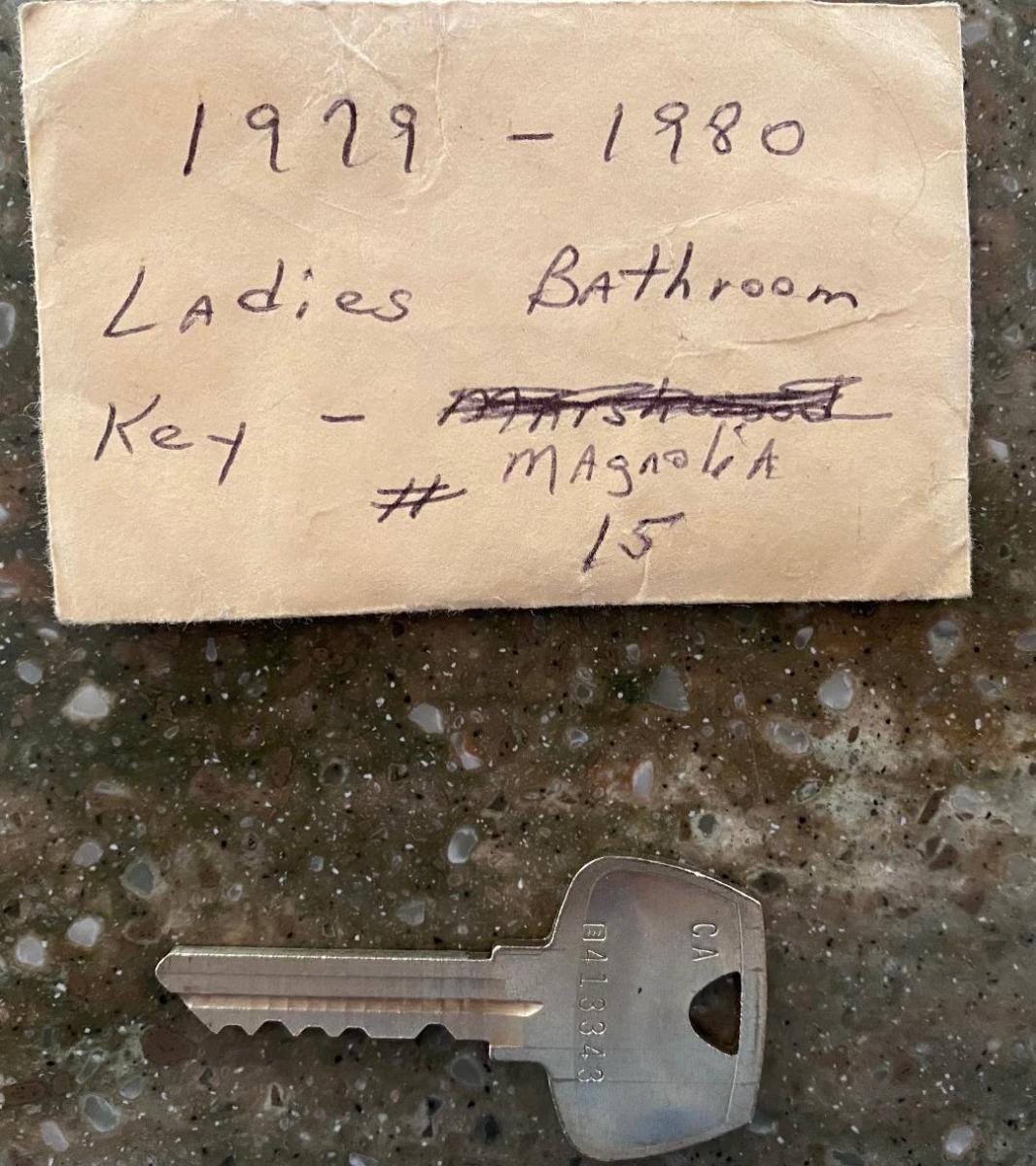 From the mid 1970s to 1980, there was a Cracker Barrel Store with gas pumps just outside The Landings’ North gate, which was the only gate at the time. The fire station just inside the gate doubled as a church on Sunday mornings. Fire trucks were backed out, folding chairs placed, and about 30 residents convened in golf carts and golf clothes for the church service. Afterwards, they would have breakfast at Marshwood, the only restaurant on the island, play golf on the only golf course, then sit at the bar, eat peanuts, and watch golf. This group formed the Skidaway Community Presbyterian Church (now the Skidaway Community Church). The tennis courts at Marshwood were the only ones, and there was a playground. Ladies had their own key to the restroom on the Magnolia golf course.

During this time, there was a drawbridge, which was the only means of accessing the island. Toni said it was unstaffed manned most of the time, so if there was a problem (such as the bridge getting stuck) people might have to wait for hours for someone to come from Richmond Hill or Brunswick to deal with the bridge. She recalls that one night a ferry hit a piling and they had to wait about five hours for the bridge to be inspected and deemed safe enough to return home.

The Landings sales office was a trailer on the Midpoint square. As part of her IBM job, Toni remembers selling them an IBM Correcting Selectric Typewriter,  a big advancement at the time!

As she recalls it, the townhomes in The Settlement (on Dame Kathryn Drive) were built, went bankrupt, fire destroyed some of them in 1978-1979, and they had to be torn down. Branigar took over the development of them.

I asked Toni about The Village, which came about in 1987.This was the first opportunity on the island to go shopping in golf carts. There was a convenience store, a hardw 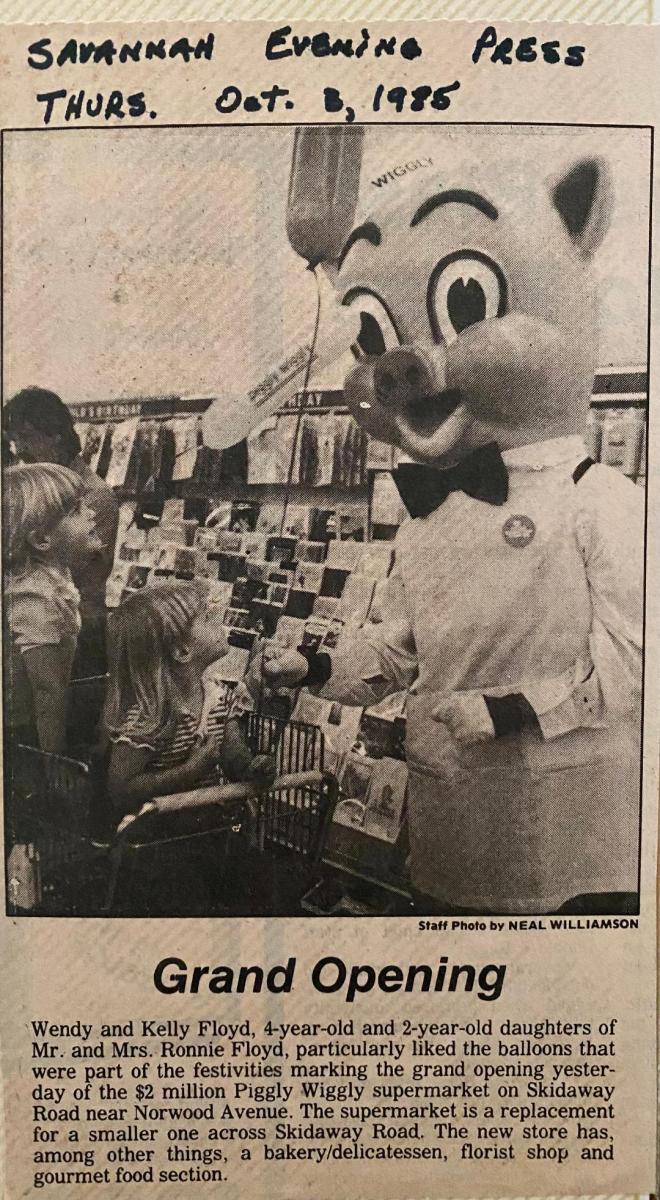 are store, which didn’t make it, and she thinks Smith Brothers was the first grocery store and Bank of America was the first bank. I asked her where people did major grocery shopping and they had to go off island. There was Piggly Wiggly in Sandfly (which later became a BI-LO and is now a Dollar store). She and her kids were some of the first visitors at Piggly Wiggly in Sandfly and had their picture taken with The Pig for the newspaper.

In 1980, there was an oyster roast to promote the purchasing of lots in the new phase (Palmetto, formerly known as Plantation). Toni believes the lots were mostly all sold that day. That area included a layout of a golf course, but it had not been completed yet, since there was no demand. When work began again, the wild boars destroyed it overnight. Toni’s husband was a hunter and friend of the original developers, so they organized hunts to clear out the boars to enable development. There was no finished road down to that area and Toni remembers getting her golf cart stuck in the mud. A friend told her that she was afraid to walk her baby, because of being scared of all the wildlife in the Landings (the amount does not seem to have changed, other than the boars).

There were very few children in the community during the early days. Toni’s daughter started kindergarten in 1986, around the time SCAD was forming. A public school official and a SCAD representative held a well-attended meeting at the Community Church to encourage Landings residents’ attendance. The Floyds decided to try Hesse Elementary School and never regretted it. There also were early attempts at golf and tennis camps on the island.

Branigar was one of the original developers and essentially ran everything. Ultimately. the homeowners’ association was started, and residents took over ownership. However, some residents left the community at the time, because of the costs involved.

When asked about other significant changes she has seen, Toni mentioned that having more young families in residence has made a terrific difference as opposed to The Landings being mainly a retirement community. The increase in family events, pools, golf memberships, bocce, tennis, and pickle ball opportunities have been a tremendous plus for the community. There have been a lot of growing pains with the changes and Toni believes social media has contributed to some of the complaints about the community, but she has always felt safe here.

Toni was a joy to interview, and her eyes sparkled as she told the various stories of early life in The Landings.

The Floyd's children were among the first to be in The Landings junior golf and tennis programs, as shown in the photos below. 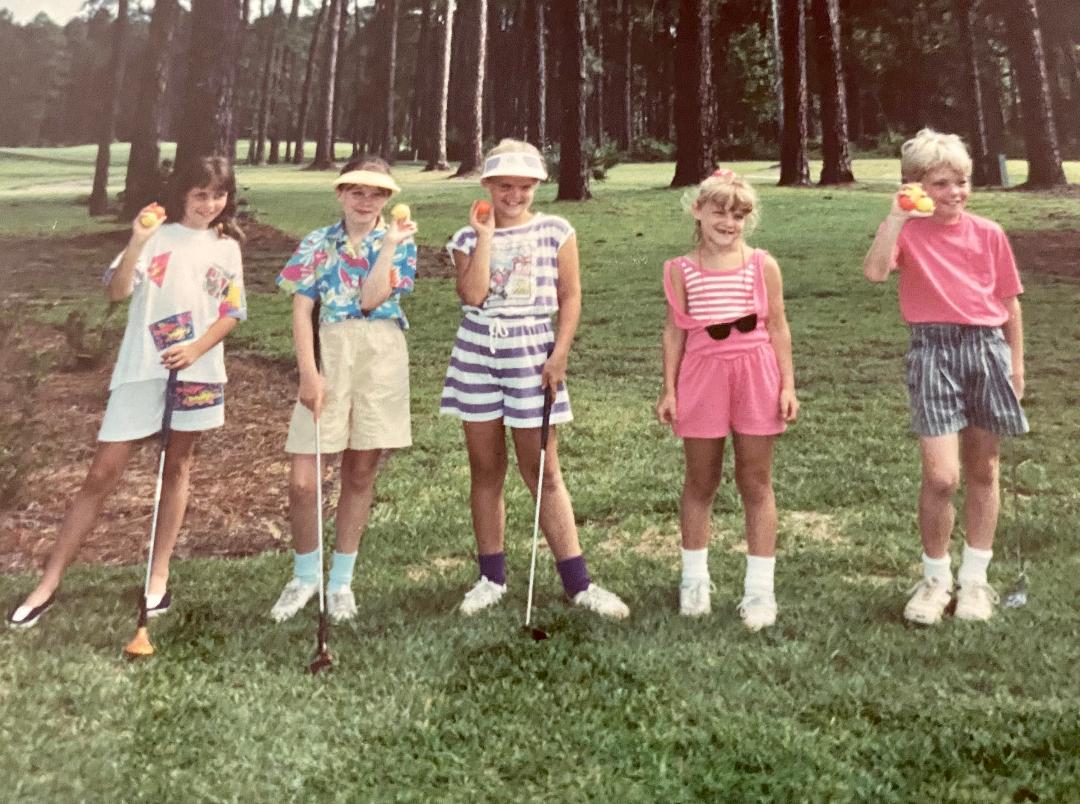 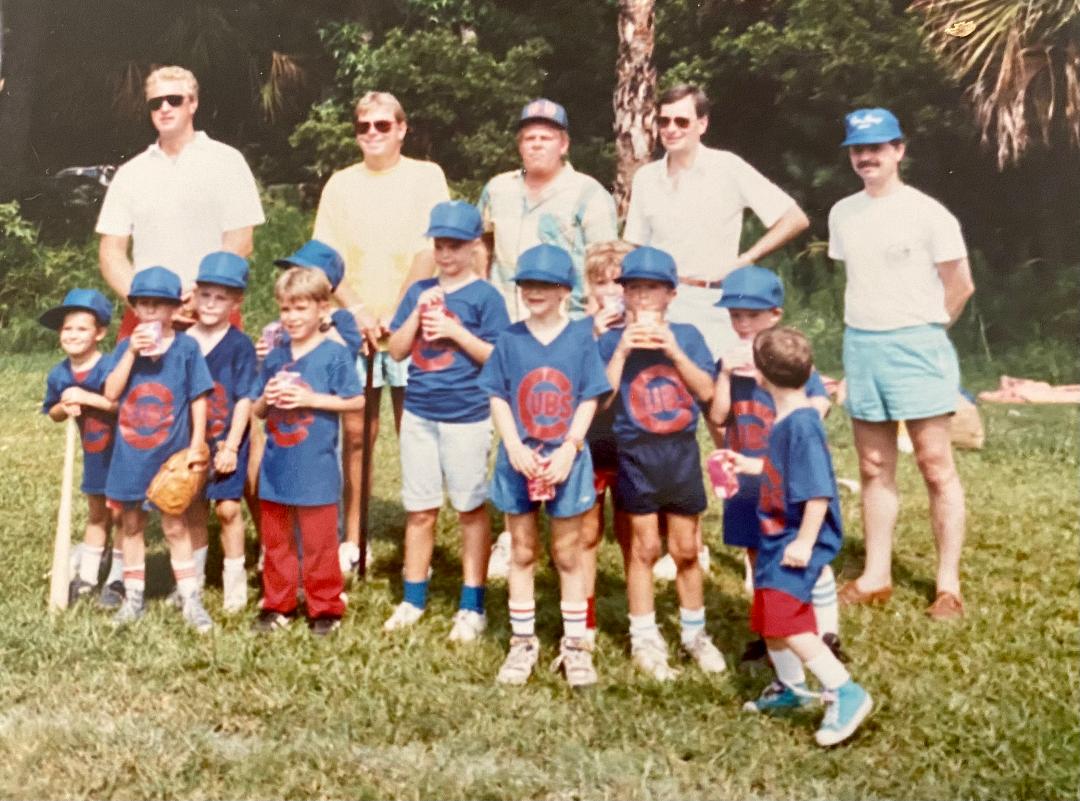 This article was originally published by The Landings Association on their website. Visit landings.org to read the original article. https://landings.org/news/2022/07/06/toni-floyd-recalls-landings%E2%80%99-early-years