Security and Chatham Emergency Services (CES) responded to Islanders' Retreat for a vehicle fire on Thursday, June 9. The driver stated that he was out for a drive and suddenly noticed flames coming from the vehicle's rear, where the motor was located. The cause of the fire is unknown. The car was removed from the scene via a tow truck.

Security and Chatham County Police Department (CCPD) responded to a minor two vehicle accident at the intersection of Diamond Causeway and Lake Street on Tuesday, June 14. Vehicle 1 rear ended Vehicle 2 at the traffic light exiting the Village. No injuries were reported.

Security and CCPD responded to a domestic disturbance on Sunday, June 13. A report was filed, but no further action was taken.

On Sunday, June 13, a resident contacted the Main Gate to report a domestic disturbance that occurred the previous evening. CCPD responded to the incident. One individual was treated for injuries, and one arrest was made.

Security responded to a residence on Franklin Court for a suspicious incident. The resident reported that her dog started barking at the door, but when she looked outside, no one was there. After walking away, she heard a noise that sounded like someone was turning the doorknob. Security performed a premise check and found nothing out of the ordinary.

On Tuesday, June 14, Security responded to a residence on Springpine Lane for a report of a suspicious incident. The resident advised that he locks the doors a certain way and leaves the door from the garage to the home unlocked. When he returned home, it seemed like someone had been in the home due to the way the door locks were found, and the garage door being locked. No items were missing from the residence. The resident had one suspect in mind; however, the video footage from the gates was reviewed and did not show the suspect's vehicle entering the community. 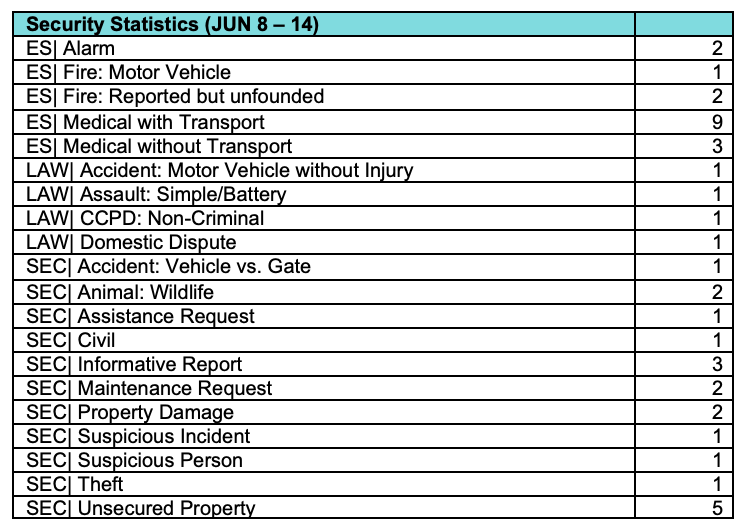 This article was originally published by The Landings Association on their website. Visit landings.org to read the original article. https://landings.org/news/2022/06/17/security-scene