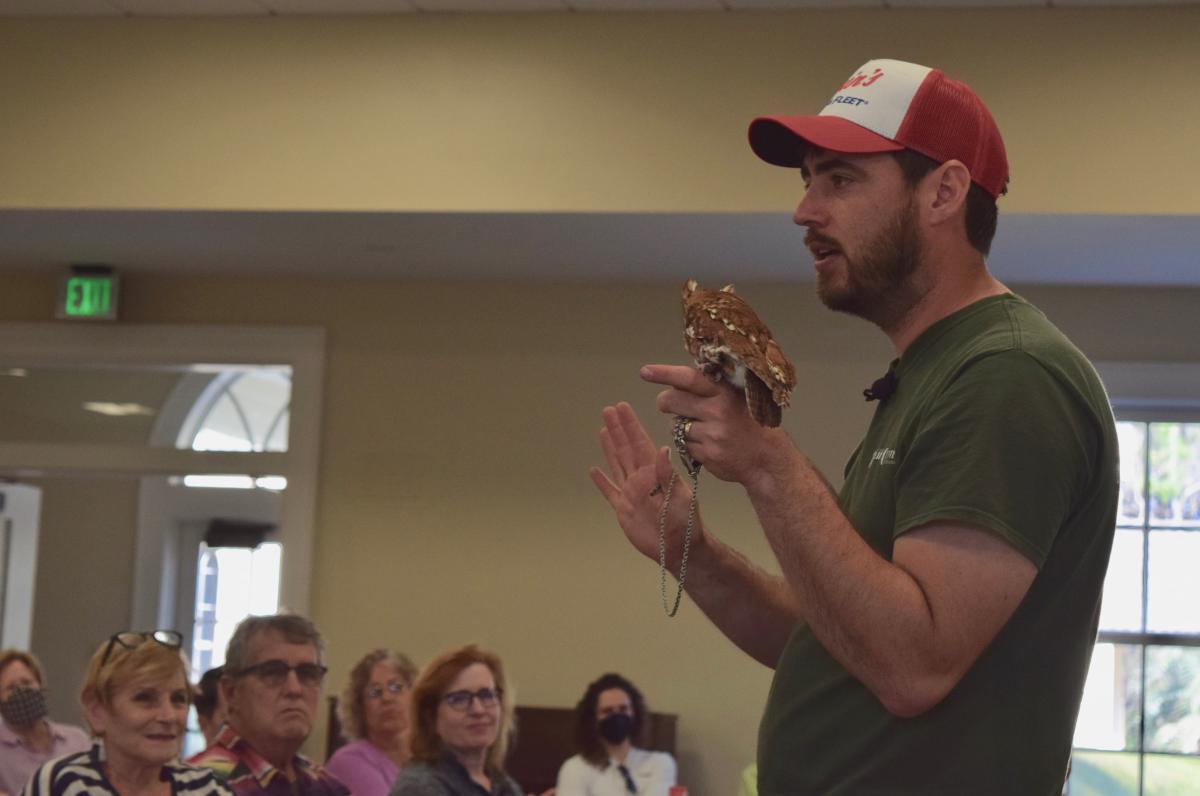 Center, was February’s featured speaker and began his remarks by listing the four types of owls that may be found on Skidaway Island. He then mimicked the calls of each, perfectly imitating some of the distinctive sounds that can be heard in the evenings at The Landings. This included the deep hoots of the Great horned owl, the whinny of the barred owl, the vibrato of the screech owl, and the harsh scream of the rarely seen barn owl. Each rendition wowed the nearly 70 attendees.

Swanson explained that the call of the female great horned owl is a bit higher pitched than the male’s. The two will call to each other during courtship, and, like an episode of House Hunters, the male will show her three possible nesting sites. She then decides which site is most suitable.

The screech owl, he said, is in many ways a miniature version of the great horned owl, with two tufts on the head, and very similar body proportions. However, great horned owls make open nests like the one at Landingsbirdcam.com, while screech owls nest in tree cavities.

“A dead standing tree is valuable,” said Swanson. “It will increase your wildlife by providing homes for all kinds of birds and supplying a food source for them as well. Screech owls eat beetles, cockroaches, and other insects, while great horned owls will readily go after snakes, crows, and any pesky squirrels."

They find prey with the help of their eyes, ears, and a neck that can rotate 270 degrees because it has twice as many vertebrae than a human neck. He said the eyes have a clear reflective film that helps them see at night, and ears placed asymmetrically on the head which, when the head turns, helps them locate prey with triangulation. But one of their greatest advantages is the structure of their wing feathers.

“They can fly nearly silently due to the finely fringed feathers that allow wind to quietly pass over their wings without resistance, enabling them to sneak up on their prey." Swanson said.

He added tht homeowners interested welcoming owls to their yards can install owl nesting boxes. The boxes should be installed approximately 15 feet high in a tree facing the southeast.

Skidaway Audubon President Dawn Cordo added that Audubon’s next guest speaker will be author and beekeeper Tierney Monahan later in March, and that Audubon’s annual pollinator plant sale is coming up in April. Online ordering will be April 1-20 with pickup at the United Methodist Church on April 23.

“We have more presentations planned, so please visit skidawayaudubon.org frequently, and be sure to click on About Us for a list of our very generous donors who make our programs and environmental initiatives possible,” she said.

This article was originally published by The Landings Association on their website. Visit landings.org to read the original article. https://landings.org/news/2022/03/10/skidaway-audubon-news-audubon-presentation-hoot