Over the weekend, Security responded to three incidents involving juveniles targeting residents with “splatter guns” (similar to a lower-velocity version of paint guns with water-based pellets).

One of the reported incidents was on common property, at the Landings Community Park pavilion. This incident was captured on video, and those involved were identified as a resident and three guests. The Board voted to suspend the member privileges for the resident and family members living at their address, and impose fines for the discharge of projectiles on common property, as well as for the unlicensed cart driver (pending proof of an operator’s license by the driver).

Another incident occurred outside the gates. Chatham County Police Department (CCPD) responded, interviewed the alleged shooter and the alleged victim, and did not make an arrest.

A third incident involved a resident reporting being shot by a splatter gun on Westcross Road. Police responded again on Monday to take victim, witness, and suspect statements.

In all incidents, Security Director Tim Cook, along with other Security Officers, have spoken with identified parties to gather information. A review of reports on file revealed that of the three incidents regarding the “splatter guns,” at least two may be connected. Landings Security has been urging those targeted to complete witness statements and to file those with the police as well.

On Wednesday, February 16, Security and Chatham Emergency Services (CES) responded to a residence on Carlow Lane for a report of a fire. Upon arrival, CES located the fire in the backyard and determined the resident was burning yard debris. There were no flames present at the time; however, CES doused the debris to ensure the fire was out. The fire damaged nothing. The officer informed the resident of the rules and how to dispose of yard debris properly.

Security responded to Pineside Lane for a theft report on Monday, February 21. The resident advised that she had received notification of a package delivery on Friday evening. When she went to retrieve the package a short time later, it was no longer in her mailbox. The incident was not captured on her doorbell camera. The resident declined to file a report with CCPD.

On Thursday, February 17, Security responded to a residence on Romerly Road for a report of a suspicious person looking inside the home with a flashlight. The homeowner was not on site at the time but witnessed the incident on their doorbell camera. Upon arrival, officers spoke with the homeowner’s real estate agent, who was on site and performed a perimeter check and found nothing out of the ordinary. The homeowner provided a photo of the individual from the doorbell camera, and Security was able to identify the person as a process server authorized to be in the community. The homeowner was notified of the findings.

Security responded to Deer Run for a report of gunshots on Friday, February 18. An officer patrolled Deer Run and side streets, along with Willeford Drive and side roads, with negative results. Extra patrols were performed in the area.

On Tuesday, February 22, Security responded to Chatuachee Crossing for a report of a suspicious vehicle. An officer patrolled the area with negative findings. Extra patrols were performed in the area.

Tim Cook attended a Security Directors meeting in South Carolina and learned that pine straw scammers had targeted several properties. Their typical scam is to quote a lower-than-average price per bail for the job, but upon completion, they claim they had to use significantly more bails than initially quoted. As a reminder, solicitation is prohibited inside our community.

Other Security Directors reported thefts from vehicles occurring at their properties, all of which involved unlocked cars. One property alone had more than 30 thefts in a week. Please, lock your doors (home and car), and ensure your valuables are out of sight and secure. 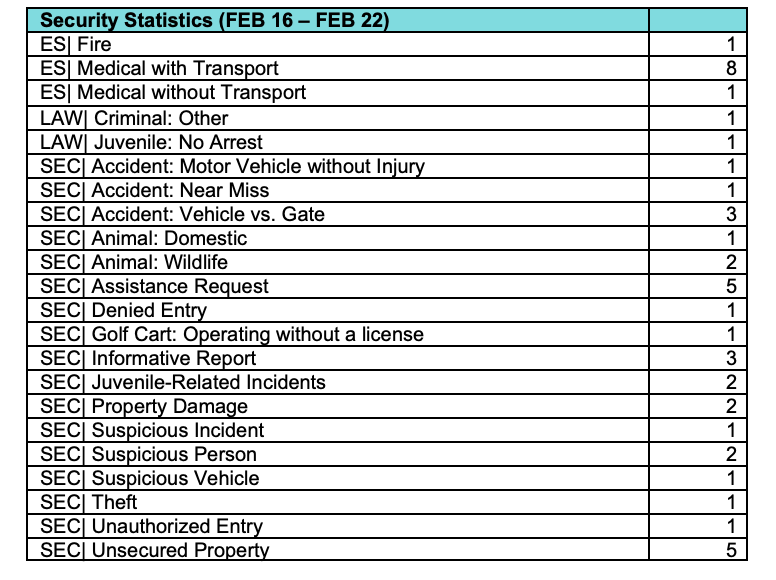 This article was originally published by The Landings Association on their website. Visit landings.org to read the original article. https://landings.org/news/2022/02/25/security-scene