A resident reported vandalism to the second story of the Delegal Tower on Friday, June 18. Someone had drawn a circle with a star inside it and three Ks in what appeared to be red lipstick on the posts. Public Works was notified and removed the graffiti from the posts. Security is reviewing the video footage in an attempt to identify who may have drawn the graffiti.

While performing routine security checks on Sunday, June 20, a security officer found the gate to the Marsh Tower was not secured. Upon further inspection, the door appeared to have been kicked in as the locking mechanism to the door was still attached to the lock and broken away from the door. It is unknown who may have kicked open the door. The report was forwarded to Public Works so that the door could be repaired.

Security responded to a suspicious vehicle on Covey Point Lane on Sunday, June 20. The complainant advised that the car had been parked for several days, and no one knew whose vehicle it was. While attempting to find out who owned the car, another resident drove up and stated it was his vehicle. The tow truck never showed up on Friday. The vehicle was removed later that evening.

On Sunday, June 20, Security received multiple reports about a vehicle throwing cheese at other vehicles on Diamond Causeway and McWhorter Drive. One caller provided a license plate number, which came back to a guest of a resident. Shortly after receiving the complaints, the guest attempted to gain entry. When questioned about the incident, the guest initially stated that they had thrown something from the vehicle and not meant to hit the other vehicle. However, when the officer explained that there had been multiple reports, the driver admitted to the incidents. The officer further explained the dangers of such activities before allowing entry. The officer also advised the resident sponsor of the incident. 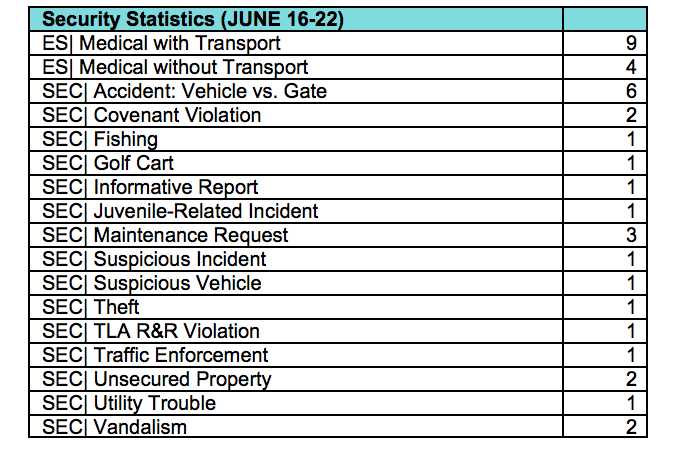 This article was originally published by The Landings Association on their website. Visit landings.org to read the original article. https://landings.org/news/2021/06/25/security-scene