Landings Security is still urging residents to practice extreme caution when approaching pedestrians and to contact CCPD immediately if illegal activities are observed (pedestrian stepping out in front of traffic), and then notify Landings Security.

On January 17, Landings Security and Chatham County Police Department (CCPD) responded to a motor vehicle crash (MVC) involving a golf cart and a vehicle. No injuries were reported, but both vehicles sustained damages. It appeared the cart driver failed to properly yield and turned into the passing vehicle.

On January 11, Landings Security inquired about an unreported incident involving a bicyclist and a golf cart. The bicyclist provided a delayed report stating she was traveling southbound on the community path when a golf cart that crossed Landings Way South near Bartram Road failed to yield when it entered the community path and turned right. The bicycle and cart briefly made contact, but the cyclist never lost her balance and remained on the bicycle. Unfortunately, the only description provided was a man approximately 65 – 75 years, wearing a hat. The cart’s registration number was not obtained. The driver of the cart reportedly yelled something and never stopped.

On January 14, Landings Security responded to a report of a missing water hose reel/retainer from the side of a residence. No suspects or witnesses were identified, and CCPD was not contacted.

On January 16, the Shellworth Crossing Street sign was removed from its location and placed in a storm drain. The sign had minor damages and was placed back in its rightful location. Landings Security continues to deploy and monitor various counter measures and is encouraging residents with cameras to report any suspicious activities observed or captured on their camera system.

On January 11, Landings Security received several calls regarding a man sitting on top of the Skidaway River bridge. CCPD was immediately dispatched. Upon a Landings Security Officer contacting the person, he immediately fled on foot to the nature preserve behind Long Island Road. CCPD arrived on scene and after a short search apprehended the subject. The person was wanted by CCPD because he had just escaped from Georgia Regional as an involuntary patient.

On January 15, Landings Security responded to a suspicious person who provided one of the Club’s Personal Identification Numbers and a current employee’s name at Deer Creek’s callbox. Contact was made with the suspicious person who refused to provide a form of identification. CCPD was dispatched, but the person departed The Landings prior to their arrival. The vehicle’s tag number was captured, and a Be On the Lookout (BOLO) was issued. Club management were provided a copy of the incident report and will change their Personal Identification Numbers.

On January 13, Landings Security responded to a man going through bulk trash that had been placed curbside for pickup. The person was identified and stated he was visiting a friend within The Landings but could not provide the friend’s address. It appears he entered the community on a bike and was not aware the community was private. The person was escorted off Landings property, and no further incidents were reported. CCPD was contacted and provided the information to issue a trespass warning against this person.

On January 12, Landings Security responded to the area of Greyhen Lane for a vendor pulling a trailer of pine straw and soliciting. A search of the area resulted in not finding a vendor with pine straw, and no further reports were received for door-to-door solicitation. 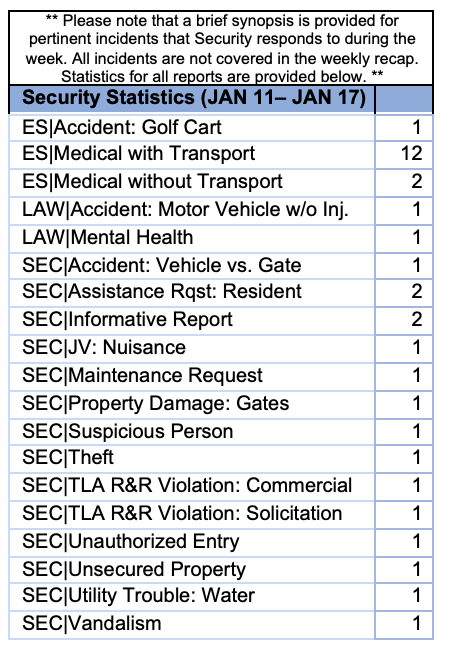 This article was originally published by The Landings Association on their website. Visit landings.org to read the original article. https://landings.org/news/2023/01/19/security-scene