Landings Security responded to a complaint regarding a dog owner not picking up after his pet. The dog owner was reminded to be a responsible pet owner and pick up after his pet, even if it’s inside a wood line.

A resident was reminded pets are not allowed on the field or the walking path at Landings Community Park (600 Landings Way South).

Landings Security responded to an incident in the area of Gray Heron Retreat regarding a dog leaving its property and attempting to attack another dog being walked on a leash. The dog’s owner was fined, and the Chatham Animal Services was advised of the leash law violation.

Landings Security responded to a resident’s complaint about a vendor cutting through his property via a semi-circle driveway. The resident pursued the vendor and upon making contact an alleged verbal and physical altercation ensued. The vendor was identified and contacted. No charges were filed by either party, and both declined to notify Chatham County Police Department (CCPD).

Landings Security responded to a possible underage golf cart driver who was allegedly driving carelessly. The owner of the cart was identified and confirmed her babysitter, a licensed driver, was operating the cart at the time. Witnesses confirmed the babysitter “panicked” but did not hit anyone and stopped to ensure the other party was okay. The cart owner acknowledged responsibility for the babysitter’s actions and offered to speak with the other party involved.

Members of the 2023 Appeals Committee met for an orientation and briefing.

** Please note that a brief synopsis is provided for pertinent incidents that Security responds to during the week. All incidents are not covered in the weekly recap. Statistics for reports are provided below. 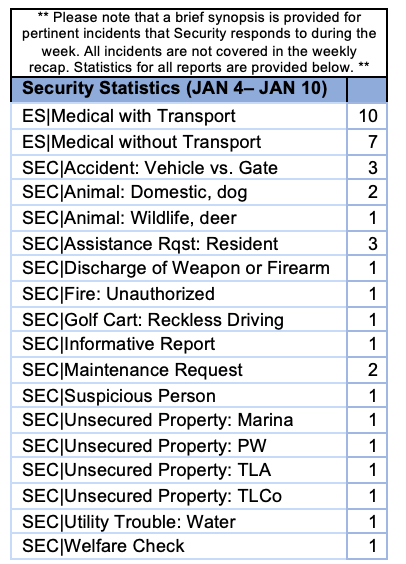 This article was originally published by The Landings Association on their website. Visit landings.org to read the original article. https://landings.org/news/2023/01/12/security-scene