On December 5, Landings Security responded to a report of outgoing mail being removed from a resident’s mailbox prior to the United States Postal Service (USPS) person collecting mail for the day. The mail removed contained a check, and the resident informed their banking institution in a timely manner to cancel the check.

On December 5, Landings Security responded to a report of children playing on a neighbor’s playset without the homeowner’s permission. When asked to leave by the property owner, the juveniles remained on the playset. Upon Security’s arrival, the juveniles had departed. The responding Officer contacted the juvenile’s parent and explained what had occurred. No further incidents were reported.

Landings Security responded to several complaints of dry trash (yard debris) placed curbside more than 24 hours prior to Tuesday’s scheduled pickup day. Warnings and fines were issued based on prior history of multiple offenses. Vendors were reminded to remove landscape debris and informed the North Gate sells dump tickets for Evergreen’s facility on Skidaway Island.

A Tire and AED Relocation

While performing routine checks of Landings Community Park’s restroom, an Officer discovered a large tire, commonly used for fitness, in the women’s restroom. Tires left on TLA Common Property will be discarded by Public Works personnel.

The Automated External Defibrillator had been removed from its case outside the restrooms and placed in the woman’s restroom. The AED was in good order and placed back in its proper location.

A golf cart driver was issued a warning for operating a golf cart in a “cart-free” zone. Golf cart free zones can be found in the 2022 Landings Residential Directory on page 40, and online in The Landings Rules and Regulations, section G.12 (www.landings.org/resources) > then click Governing Documents. 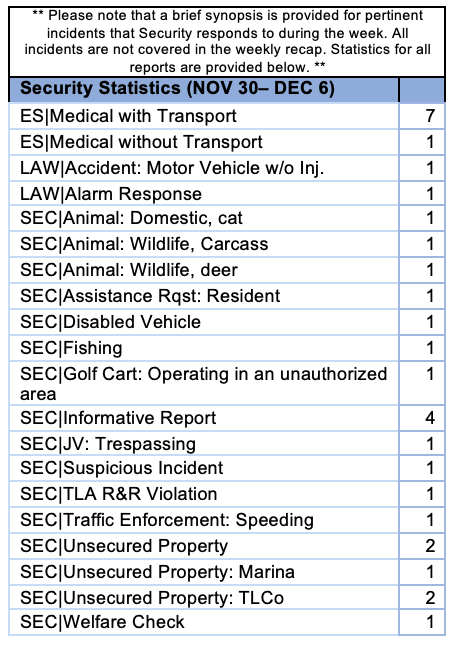 This article was originally published by The Landings Association on their website. Visit landings.org to read the original article. https://landings.org/news/2022/12/09/security-scene