Landings Security responded to several welfare checks during the last two weeks. Some turned out favorably with the residents being well, but two checks did not end as favorably. One resulted in finding a resident in need of assistance, and the other in discovering a deceased person.

KNOX-Box – Chatham Emergency Services (CES) used a KNOX-Box to enter one resident’s home and had to make forced entry into another home. KNOX-boxes are strongly recommended and can be purchased online (bit.ly/3UtcEXK).

In most cases, residents still are not using ABDi’s Emergency Contact option and annotating who they want Chatham County Police Department (CCPD), CES, or Landings Security to contact in emergency situations.

On November 29, Landings Security and CCPD responded to a minor vehicle crash on Diamond Causeway. No injuries were reported.

On November 27, a parking issue, which was resolved, escalated into a neighbor-to-neighbor dispute. CCPD responded to speak with the parties involved and filed an official police report to document the incident. No further incidents or safety concerns were reported.

Security recently responded to several injured and deceased deer calls. A few of the deer appeared to have been shot by a bow/crossbow, and others seemed to have been killed by motor vehicles. Department of Natural Resources (DNR) was contacted regarding any laws that may have been violated. Residents are reminded that the discharging of fireworks, firearms, or any type of weapon (e.g., pellet gun, BB gun, air rifle, paintball gun, bow and arrow, or other devices discharging projectiles) on common property is prohibited.

On November 23, Security responded to a verified barking dog complaint. The owner, who was out of town, was contacted and had a family member respond to resolve the issue. The incident also was reported to Chatham County Animal Services. The complainant was encouraged to call Chatham County Animal Services first and then TLA Security for ongoing issue which may be deemed a nuisance.

On November 16, Security responded to a delayed report of two dogs running loose which resulted in the dogs jumping on a resident who was walking in the vicinity of the dogs’ home. The dogs’ owner was contacted and provided a warning for allowing his dogs to be off his property and not on a leash. No prior incidents were on file for this dog owner. The incident report was forwarded to a Chatham County Animal Services.

On November 18, TLA Security responded to a US flag being torn down from a tree. No suspects or witnesses were identified at the time of the incident. 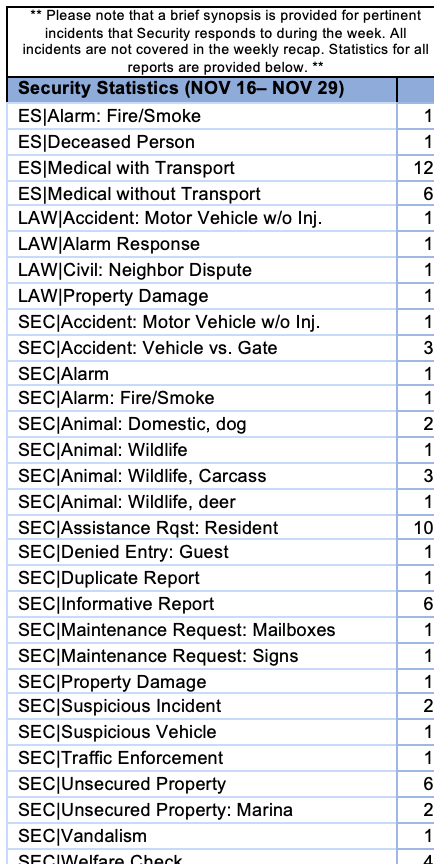 This article was originally published by The Landings Association on their website. Visit landings.org to read the original article. https://landings.org/news/2022/12/01/security-scene