A resident reported a check made payable to a vendor and left in her mailbox for pickup by a Postal Carrier was fraudulently altered and cashed. The vendor’s name on the check was “washed”, and a non-Landings resident’s name was entered. Evans County Sheriff’s Office issued a recent Press Release about a check cashing forgery scam where 27 suspects were identified. This name was not one of the identified suspects, and a search of our database did not reveal the person as a listed visitor in the community. It is recommended that all outgoing mail, especially any containing checks, be deposited directly in a USPS drop box. The closest drop box is located in The Village by South State Bank. An alternative location is the USPS branch office on Eisenhower Drive. Chatham County Police Department (CCPD) is investigating the crime. All suspects and persons of interest are considered innocent until proven guilty in a court of law.

On November 5, TLA Officers and Chatham County Police Department (CCPD) took a report of a resident’s Capital One credit card being fraudulently used (and declined) for a purchase at a local retailer. The resident’s purse containing the credit card may have been left unattended while shopping at an off-island grocery store and in her unlocked vehicle at the Dog Park.

On November 7, TLA Officers took a report of a missing US Flag on Old South Lane. No camera footage was obtained, and no suspects were identified at the time of the report.

On November 3, TLA Officers responded to Diamond Causeway and Lake Street to assist CCPD with a Motor Vehicle Crash (MVC). A vehicle rear ended another vehicle, and no injuries were reported.

On November 2, TLA Officers responded to Diamond Causeway and State Park Road to assist CCPD with a MVC. A vendor’s truck rear ended another vehicle. Extensive damage was sustained to both vehicles, requiring towing. Chatham Emergency Services responded to the scene, but no one was transported for further medical treatment or evaluation.

On November 2, TLA Officers responded to Chatuachee Crossing for a suspicious person call. A search of the area was performed, but no one matching the description was seen. Extra patrols were performed in the area. 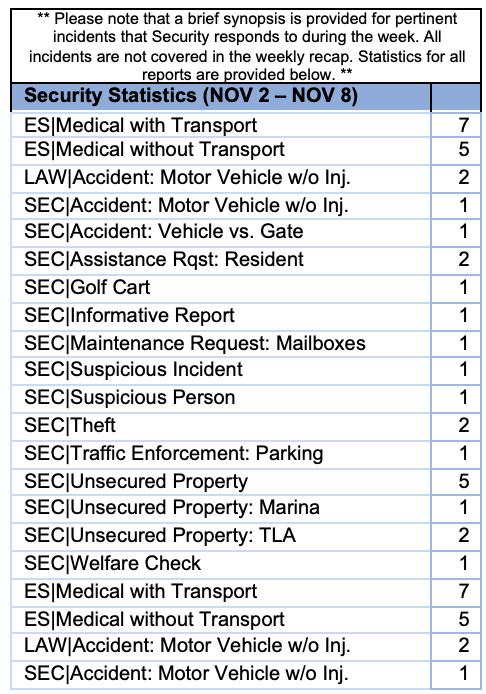 This article was originally published by The Landings Association on their website. Visit landings.org to read the original article. https://landings.org/news/2022/11/11/security-scene