On November 1, a Patrol Officer responded to a residence on Palm Glade Court regarding a suspicious incident. The wires of a newly installed light appeared to have been cut by a sharp object. No witnesses or suspects were identified at the time of the report, and no other damage was done to the light or other property.

On October 31, a Patrol Officer responded to Hobcaw Lane regarding property damage. TLA common property and a resident’s driveway were damaged when a vendor attempted to turn around his truck and trailer. Chatham County Police Department (CCPD) was contacted, and the case was turned over to them. The vendor’s insurance company will be contacted for any repairs needed.

On October 26, a Patrol Officer responded to lagoon #148 in Moon River regarding a safety concern expressed by a resident of children fishing in a lagoon with an alligator in the vicinity. The kids were aware of the alligator and agreed not to get too close to the animal or do anything to agitate or attract it. The alligator was observed for several minutes and did not appear to be an imminent threat. The kids departed the immediate area. 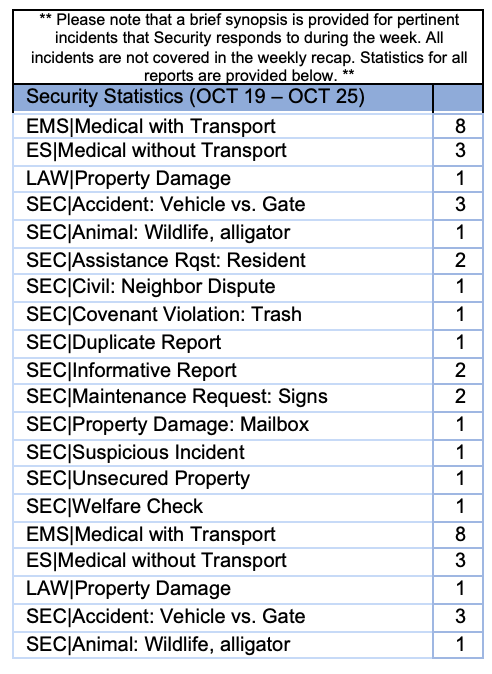 This article was originally published by The Landings Association on their website. Visit landings.org to read the original article. https://landings.org/news/2022/11/04/security-scene