On October 4, a Patrol Officer responded to a vendor taping flyers and their business cards on residential mailboxes. Contact was made with the vendor, and they were reminded about TLA’s Rule prohibiting solicitation. The vendor was asked to remove the flyers from the mailboxes, and they departed the area. A fine was issued, and their RFID temporarily suspended.

On October 2, a Patrol Officer responded to Hasleiter’s Retreat for a vehicle parked in front of a neighbor’s home who were on vacation. Upon the Officer’s arrival, the vehicle had departed. A search of the immediate area was conducted, but no unusual or suspicious vehicles were found. No other reports were received.

On September 30, a Patrol Officer responded to Romerly Road regarding a possible open fire. Upon arrival, it was determined the fire was in an approved fire pit.

The fire reported last week at the Evergreen yard was contained and eventually extinguished without incident.

On September 28, contact was made with a young driver near Landings Way South and Activity Drive who was not properly licensed. His parents were contacted, and he was escorted home. A warning was issued based on no prior documented incidents, and cooperation by him and his parents.

On September 29, a young driver was seen operating a golf cart on the community path adjacent to Tidewater Way. Contact was made with the driver upon him exiting Publix, and it was determined he did not have a valid operator’s license. The boy was escorted home, and a fine issued based on a prior warning and citation.

On September 27 between the hours of 8-10 p.m., a resident heard a noise but thought it was her pet. Upon further inspection the following morning, she discovered what appeared to be an egg splattered on the exterior of her kitchen window. No other reports were received, and no suspects or witnesses were identified. 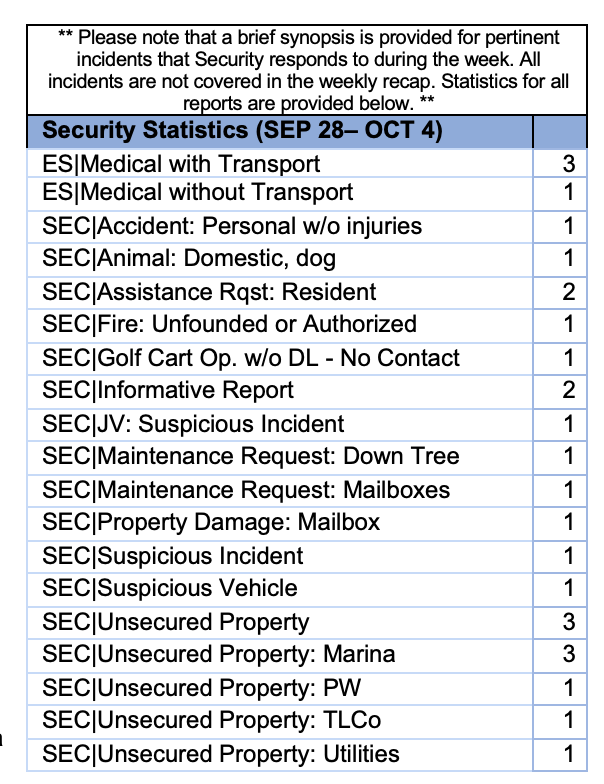 This article was originally published by The Landings Association on their website. Visit landings.org to read the original article. https://landings.org/news/2022/10/06/security-scene