On September 23, Security responded to a home in the Westcross area on two occasions for a report of motion detected on a camera located outside of the home near the garage. Security Officers performed two exterior inspections of the home, finding several deer in the area. When Security returned to the residence on the second occasion, the video footage detecting motion was viewed with the homeowner highlighting the deer in the area. The resident remained uneasy about the situation, so extra patrols were performed in the area throughout the night.

On September 25, Security received a call from a property owner who stated that he had seen his property (vacant lot) listed for sale on Zillow when he had not listed it for sale. Security searched Zillow and were able to confirm his findings. TLA, TLCo, CCPD, and other law enforcement agencies are working with the property owner in efforts to identify the suspects.

On September 26, Security responded to the North RV lot for a report of property damage sustained to the vertical fence post on lot #3. A resident on location stated he was going to try to bend the fence post back in place while Security was enroute. Upon arrival, it was found that the resident was able to pull the fence post back in place. No other damage was detected. Security checked the Avigilon camera system and found that at a vehicle pulling a boat trailer out of the RV lot had struck the fence post with the boat trailer, bending it out of place. The owner of the boat trailer was contacted about the damage sustained. Leaving the scene of an accident with property damage is a crime. 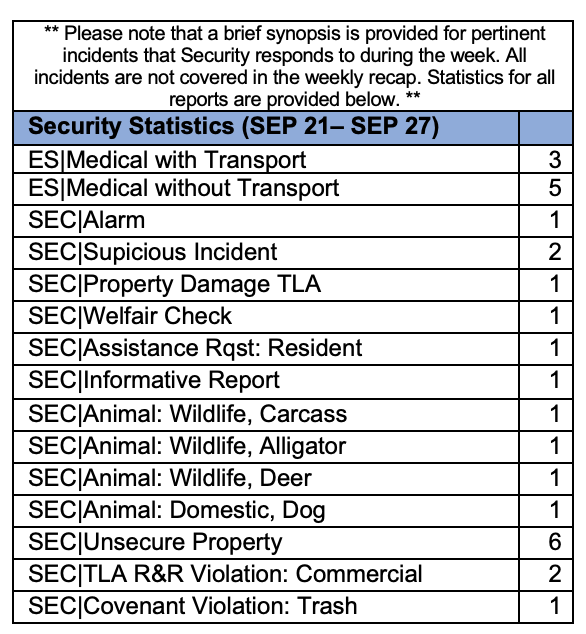 This article was originally published by The Landings Association on their website. Visit landings.org to read the original article. https://landings.org/news/2022/09/30/security-scene