On September 14, Security responded to a motor vehicle accident at the intersection of Diamond Causeway and Westcross Road without injures. Minor damages were caused when one vehicle rear-ended another at the traffic light. CCPD reported to the scene, but no citations were issued.

On September 16, Security received a report of a silver SUV driving erratically on Landings Way South near Delegal Road. Security responded and spotted the vehicle traveling north on Landings Way South near Black Hawk Trail. Security activated lights and sirens once behind the vehicle, observing it swerve into oncoming traffic. The vehicle eventually turned right into The Landings Association’s entrance, striking a cart path stop sign as it turned right onto the cart path. The vehicle also struck a small utility box before coming to a stop on the cart path.

A smell of alcohol was coming from the vehicle, and CCPD was notified to respond due to the property damage. CCPD Officers arrived and perform a field sobriety test, then arrested the driver who was a guest of a resident for DUI-Less Safe, failure to maintain lane, no proof of insurance, and failure to change driver's license within 60 days. Sapp's towing removed the vehicle from the community.

On September 16, a resident on Wesley Crossing reported that he had placed a racoon trap under his home and recently discovered that someone had removed it from his property. The homeowner declined to report it to CCPD.

On September 16, Security responded to Pensyre Retreat regarding a water main break. A subcontractor for Comcast was in the area running new fiber-optic cable line. In the process, the workers broke a water main line under the driveway at one of the residences. Utilities of Georgia, Inc. responded and shut down the water to the entire street to make the necessary repairs.

On September 18, Security responded to the Delegal Creek Marina roundabout after receiving a report of damage to the golf cart bridge leading to Delegal’s Retreat. Security closed the bridge to all traffic until the Public Works Department could evaluate and repair the damage.

On September 20, Security responded to a report of a dog bite which had occurred two days earlier at the Sunset Park. A resident stated that she was riding her bicycle past the Sunset Park and noticed a gentleman with two dogs, one of which was running off leash. The cyclist reported riding past the dog that was off leash when it jumped up and snapped at her, biting her hip. The cyclist continued to pedal away and did not make contact with the dog owner who was not identified.

On September 20, Security received of a report of smoke in the area on McWhorter Drive, between the Main ACF and North ACF. Upon arrival, they discovered hundreds of yards of charred brush due to a down power line. CES and Georgia Power responded to the scene. CES was able to extinguish the fire, and GA Power had to shut down power to the area to resolve the down line issue, resulting in multiple outages throughout the island. 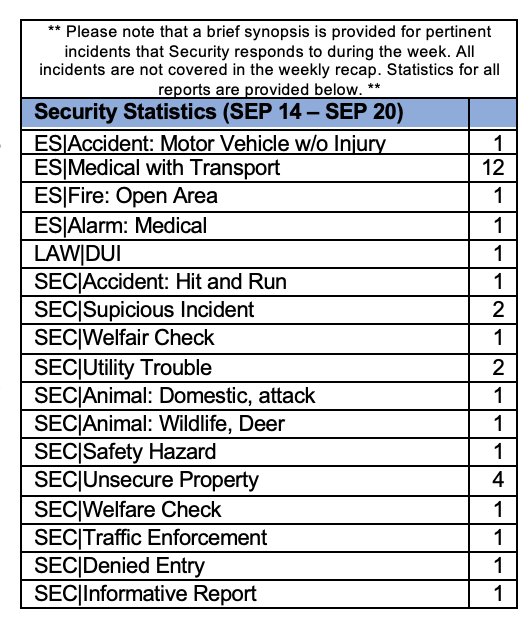 This article was originally published by The Landings Association on their website. Visit landings.org to read the original article. https://landings.org/news/2022/09/23/security-scene