On Saturday, July 9, Chatham County Police Department (CCPD) responded to a domestic incident where a subject barricaded himself inside a residence. The SWAT team was called, and the suspect surrendered. An email was sent to residents regarding TLA’s involvement in situations involving law enforcement agencies having jurisdiction, mass communication decisions, and the authority of the on-scene commander, as well as the primary concern for responding Officer safety. If you missed the email, you can read it on our website in the Archived Emails area (www.landings.org/archived-emails).

On Monday, July 11, Security came upon a hit-and-run accident without injuries at the intersection of Westcross Road and Diamond Causeway. Chatham Emergency Services (CES) and CCPD were already on the scene. The victim stated that the other driver left the scene after saying he was busy and needed to go. The man’s license plate was shared with CCPD, which is investigating.

Security and CES responded to a report of an accident at a residence on Monday, July 11. The resident had accidentally driven their vehicle through the garage door and into the garage, striking an interior wall. No injuries were reported, and the car sustained some front-end damage.

Security responded to a residence on Ale House Retreat for a noise complaint on Friday, July 8. Upon arrival, the officer could hear a group outside the home speaking very loudly. Contact was made with the homeowner, who stated that the group would move inside and was very apologetic. The responding officer remained in the area to ensure the noise ceased. No further complaints were received. 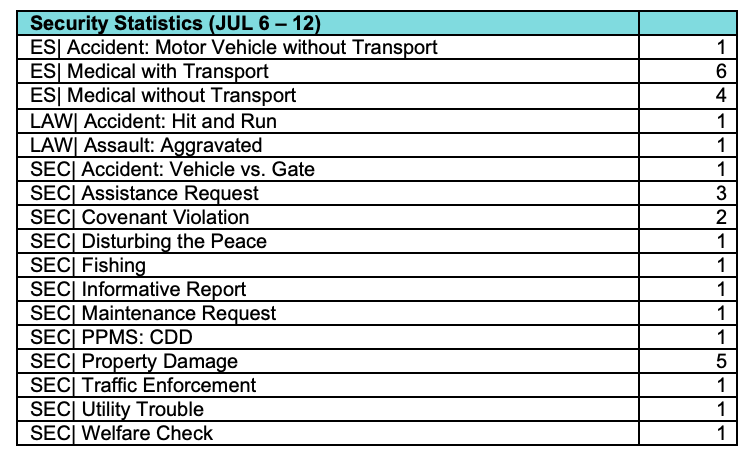 This article was originally published by The Landings Association on their website. Visit landings.org to read the original article. https://landings.org/news/2022/07/14/security-scene