On Saturday, June 25, Security, Chatham Emergency Services (CES), and Chatham County Police Department (CCPD) responded to Priest Landing Drive and Monastery Road intersection for a motor vehicle crash. Upon arrival, officers learned that the first vehicle's driver ran the stop sign and struck the second vehicle, causing significant damage to both cars. The first vehicle's driver was cited for failing to stop at a stop sign and causing the accident. Both vehicles were removed from the scene via a tow truck.

On Friday, June 24, Security witnessed a vehicle pull into the resident lane, reverse, and proceed to mount the median. Upon speaking with the driver, Security determined she was neither a resident nor a guest. The smell of alcohol was present from the driver, so CCPD was notified. A field sobriety test was conducted, determining that the driver was intoxicated. The driver was arrested and charged with a DUI. The vehicle was towed from the scene.

Security responded to Riverwatch Lane on Sunday, June 26, for a theft report. The resident advised that they own two properties adjacent to each other, and one of them is an empty lot. The resident informed Security that there was a bench that he had moved on Wednesday, June 22 to the back part of the lot near the water. When he looked on Sunday morning, the bench was missing. Nothing else suspicious was noticed. The resident declined to file a report with CCPD.

Security responded to Marsh Tower Lane and Morning Marsh Road for possible vandalism on Wednesday, June 22. There was graffiti on a Port-a-Jon and a dumpster at both locations. It is unknown if the graffiti occurred once the items were delivered or if it was already on them upon arrival. 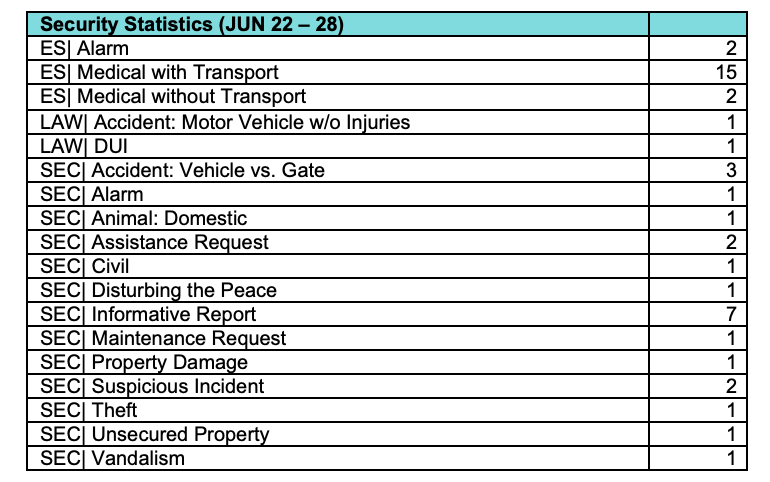 This article was originally published by The Landings Association on their website. Visit landings.org to read the original article. https://landings.org/news/2022/06/30/security-scene