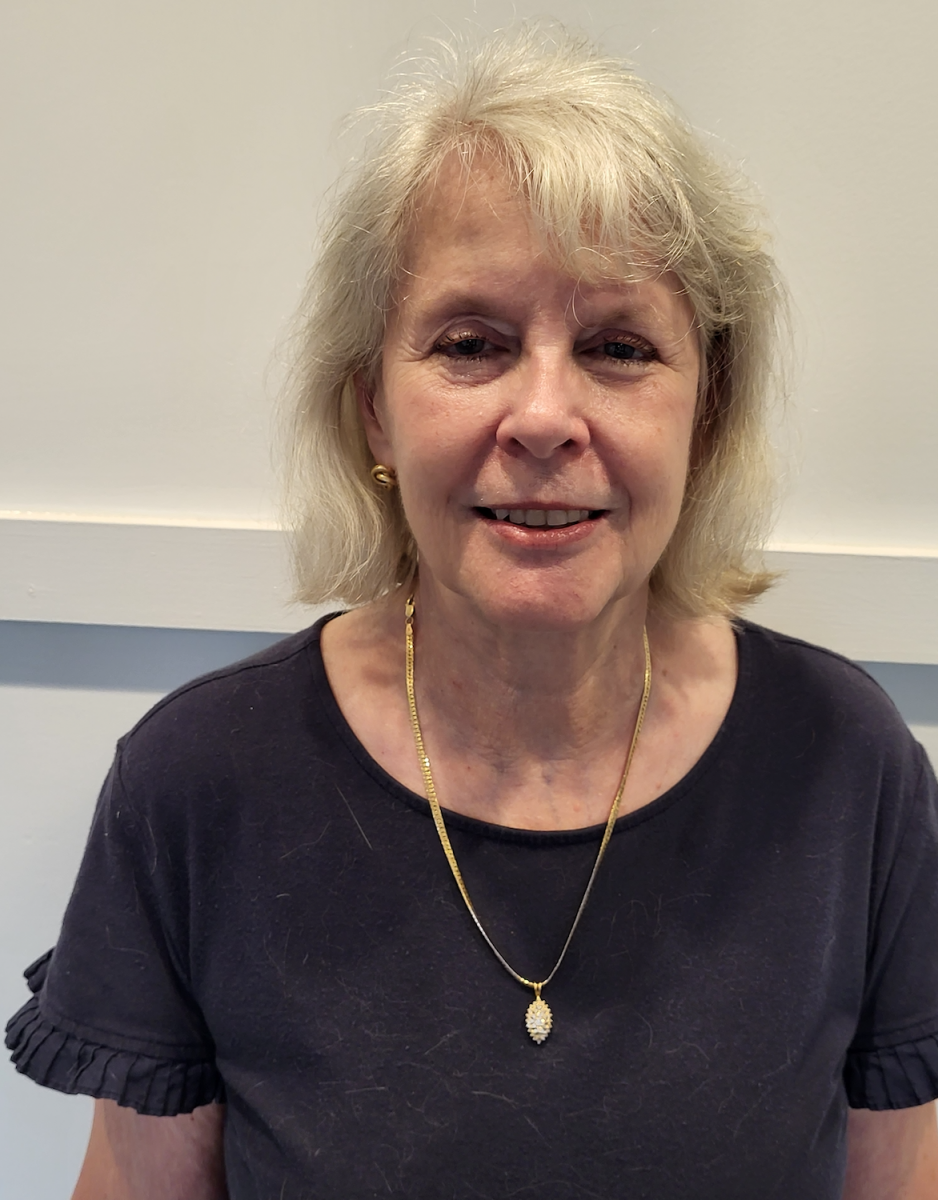 Karen Dove Barr (shown at left) and her husband purchased their lot on Brisbane Court in Tower Point in 1985. They initially rented in the “historic part of the community”, The Settlement (the townhomes on Dame Kathryn Drive), while they were building their house. At the time, Tower Point was just opening up, and there was a road going through their lot. Karen said there was a plan to have condos near the Marsh Tower. Since there was no ocean view, the expansive view of the marsh would have been desirable. Luckily, that did not occur. She had lived in Savannah for a while, and neighbors from Windsor Forest had moved here. She recalls that there were more oaks in Tower Point than pine trees. When the footings for their house were dug, pieces of blue and white pottery were found.

At that time, Landings Way South was a dirt road. Midpoint had been started, as well as the golf course. There was a huge sawdust pile in Oakridge, where the Union Camp logging camp was located. This area was where Log Landing Road is now. Although kids were told not to ride their bikes on this road because it could get internally hot and have a spot where it might cave in, they still did, riding around the loggers’ cabins in the area. Karen remembers an abandoned 1940’s Army surplus jeep (jeeps were useful for driving around on the rough roads), which had a tree growing up through it.

Prior to the drawbridge being built, Skidaway was only accessible by boat. Karen tells of people rowing over to the north end of the island from Burnt Pot Island, to hunt. She shared that the Roeblings (who had a cattle farm where the Skidaway Institute of Oceanography now is) had horse-mounted guards, to try to prohibit the practice. There also were rumors that, due to the isolation, possibly Skidaway had been used for the witness protection program.

More people moved to the community, and Oakridge and Deer Creek brought about big changes. When the Fitness Center was built, the belief was that older people would not use it, but she said they definitely did. There were two treadmills, and people lined up to use them. Karen said, “there were some aerobic exercises, with people fighting when others jumped the line.”  She went in the evenings, and it was a great place to meet people. The Fitness Center also had some free weights, a stair master, and energy drinks and bars. Karen recalls that the early Village had the Smith Brothers grocery, the pharmacy, and travel agency. There was no Lake Street at that time.

The current, large bridge took four-to-five years to build. The approaches were first cleared, and concrete pylons were put in. They built from each side, and when it came time to connect in the middle, it wasn’t right, so re-work had to be done. At the time, the entrance to Butter Bean Beach was made larger. Karen remembers crabbing on the Moon River Bridge. She believes that granite was hauled in to build the Causeway, as well as dirt used from dredging. McWhorter Drive was woods all the way down, on the north end of the island. The Oceanography Institute planted rows of pine trees in the 1990s. They have now grown together into a forest, so the rows are not as obvious. In some areas, Union Camp wanted to clear the oaks and plant pines. However, the size and strength of the oaks made it prohibitive to try to cut them down, so the company circled them with saws, to let them die. Some did not, and you could see the circle scars.

Karen believes The Landings may have been modeled after Amelia Island, in wanting to preserve some sense of a maritime forest. There were restrictions on having large lawns with just grass. She wrote nature articles for the TWATL for 20 years. She also has written three books, including the most recent Burnt Pot Island, which is an historical fiction about early life on Skidaway Island. She shared the story that the Oakridge Fitness Center had a 5K Run, which she tried out, prompting her first book, Running Through Menopause.

Karen was a delight to talk to, as she shared her stories of early life in The Landings.

This article was originally published by The Landings Association on their website. Visit landings.org to read the original article. https://landings.org/news/2022/06/30/karen-dove-barr-reflects-life-landings-during-early-years