On Friday, May 20, Security and Chatham County Police Department (CCPD) responded to Delegal Creek Marina for a report of a two-vehicle accident without injuries. A Landings Association temporary employee who was driving a company-owned Ford F150 stated he was attempting to turn right, and the driver’s side front bumper of his vehicle struck the passenger side doors of a resident’s vehicle. The resident driver stated he was attempting to turn right into the parking lot of the marina when the Ford F150 collided with his vehicle. No citations were issued.

Security and CCPD responded to a residence for a domestic disturbance on Saturday, May 21. No arrests were made.

On Wednesday, May 18, Security responded to Breckenridge Lane for a report of teenagers inside a home currently under construction. Upon arrival, an officer made contact with four individuals inside the home who were sitting around hanging out. The officer explained that they would need permission from the homeowner to be inside the home as it was private property. All individuals were cooperative and left immediately. There did not appear to be any damages or vandalism.

On Tuesday, May 24, Security responded to a residence on Sundew Road for a report of a suspicious vehicle in the driveway. An officer made contact with the vehicle’s owner who advised he was with a painting company scheduled to perform work that day at the residence. The findings were passed along to the resident, who had forgotten about the scheduled work.

Security responded to a suspicious incident at a residence on Rebecca Lane on Tuesday, May 24. The complainant advised that he had seen someone with a flashlight in the backyard near his bedroom window. Security performed a premise check and did not notice anything unusual. Extra patrols were performed throughout the night, and no further incidents were reported. 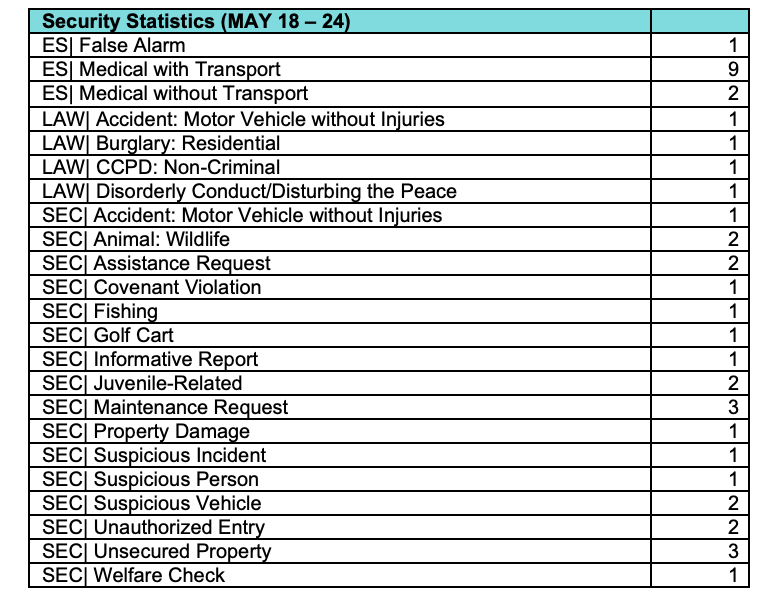 This article was originally published by The Landings Association on their website. Visit landings.org to read the original article. https://landings.org/news/2022/05/26/security-scene