On Wednesday, April 27, Security responded to Seawatch Drive for a report of a suspicious incident the previous day. An officer spoke with the worksite supervisor, who stated that he found drain line pipes had screws placed in them. He believes someone put the screws in the drain line intentionally, as they were placed so that they would have caused extensive damage. There were no other damages reported. Although the supervisor believes a disgruntled person did it, he is unaware of any disgruntled employees or vendors. Extra patrols are being performed, and counter measures have been installed.

On Thursday, April 29, Security spoke with a resident regarding a suspicious incident that occurred while she was attending The Landings Club sponsored Savannah Challenger Tournament at Franklin Creek. The woman stated that she parked her vehicle on Franklin Creek Road South around 2:30 p.m., and upon returning around 4:30 p.m., she noticed the key lock on the driver’s side door had been damaged. She said it appeared as if someone had tried to shove something into it. The woman advised that her purse was left on the seat, so it was visible to anyone walking by. No items were missing, as the suspect was not successful in entering the vehicle. Extra patrols were performed in the area throughout the remainder of the tournament. If you can’t take your purse with you, consider locking it in the trunk. 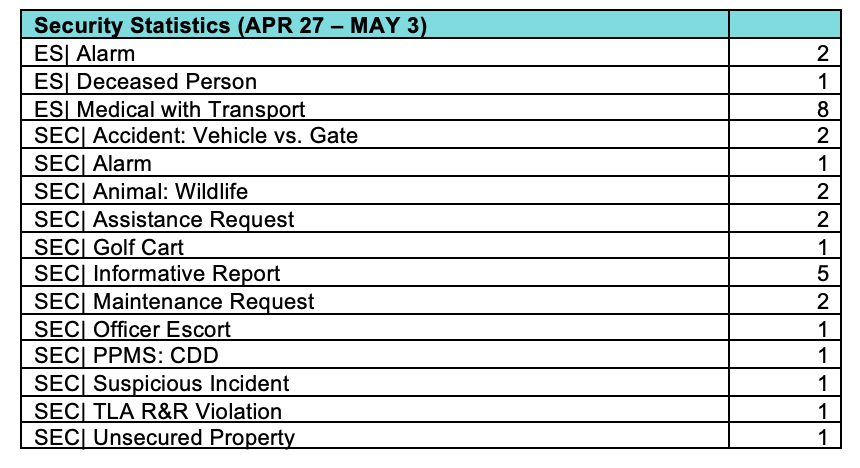 This article was originally published by The Landings Association on their website. Visit landings.org to read the original article. https://landings.org/news/2022/05/05/security-scene