Kiwanis Club of Skidaway and The Landings Woodworkers Guild: Perfect Together

Kiwanis Club of Skidaway and The Landings Woodworkers Guild: Perfect Together

In early 2020, the Kiwanis Club of Skidaway developed what it hoped would become a holiday standard for The Landings and all Skidaway Island. Members of Kiwanis joined together to develop and build a 5”x 8” white base with two flags.

At the time, Kiwanis had nearly 450 supporters in its flag program. Adding the base has been the catalyst to increasing that number to almost 1,200 subscribers, through Presidents Day 2022. Initially, Kiwanis members built the bases from wood. Work included sawing, sanding, routing, drilling, priming, painting, adding the decal, and a final coat of varnish.

The original inventory of 500 bases, called monuments, was planned to last at least a year, but they were all committed within three of the four flag holidays. The Kiwanis Club next switched its manufacturing method to using Polyvinyl Chloride (PVC) instead of wood. That eliminated painting. The bases were made in one-third of the time, reduced labor, and should last for many years. Now, almost 25% of Skidaway Island is covered with supporters from every neighborhood including Thrive, The Marshes, Modena, and South Harbor.

Last month, members of The Landings Woodworkers Guild volunteered, free of charge, their time and expertise to build the interior bases needed for the growth in Thrive and The Marshes. Their work was excellent! Ed Harvey, John Weaver, Brian Rickenbacker, and Tim Forbes produced 50 perfect flag bases in time for Presidents Day. What they completed in a matter of a few hours previously had taken volunteer Kiwanis members days to complete. Now we have a true community effort in expanding this fantastic program.

Flags are placed in your yard or in front of your apartment or townhouse for four holidays. You do not have to be home to have us do the work for only $50 per year. Don’t miss this opportunity to liven up our properties and support our community’s at-risk children. To have a flag set delivered to your house for Memorial Day, please visit www.kiwanisofskidaway.com. You also can call 912-388-6070 or email kiwanisflags31411@gmail.com. 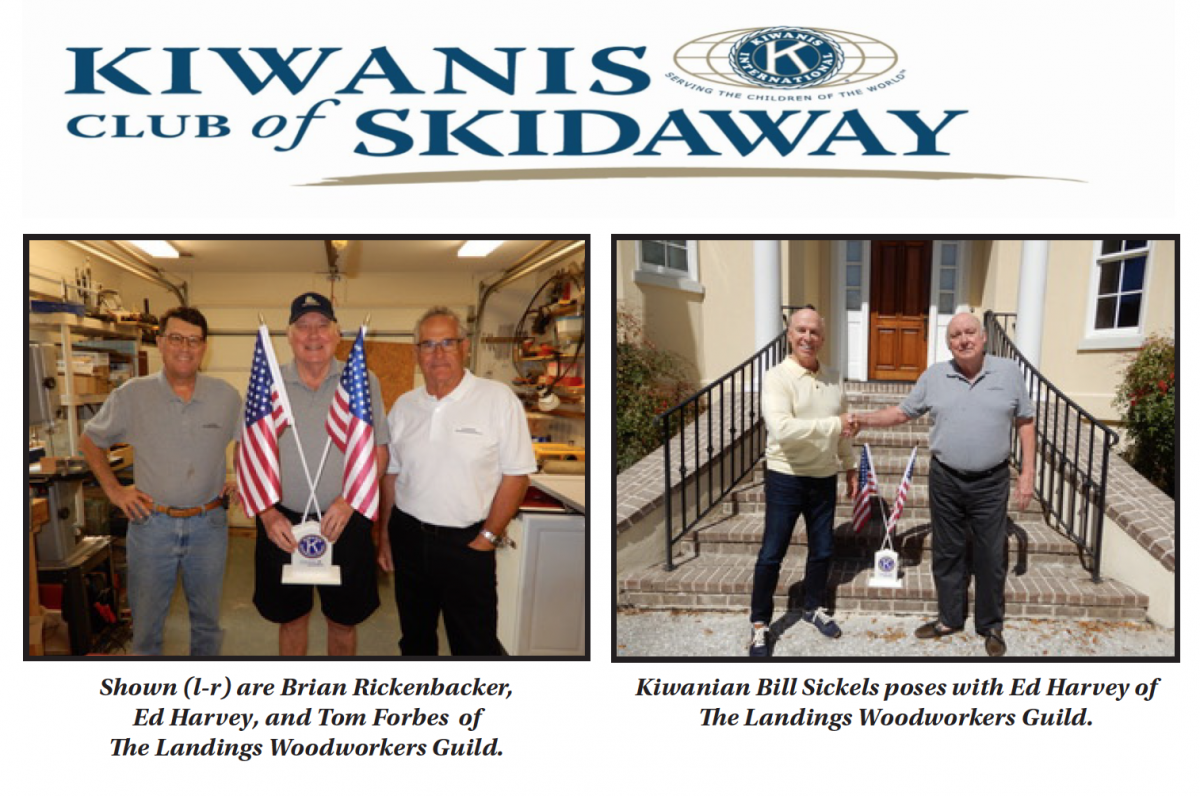 This article was originally published by The Landings Association on their website. Visit landings.org to read the original article. https://landings.org/news/2022/05/02/kiwanis-club-skidaway%C2%A0and%C2%A0-landings-woodworkers-guild-perfect-together