On the morning of Saturday, April 9, Security responded to a residence on Anderson Court for a report of a suspicious individual sitting inside the resident’s vehicle in their garage. Officers made contact with the man who advised that he was lost. At several points during the conversation, the man attempted to leave the area. Chatham County Police Department (CCPD) was notified, and upon arrival, they took over the incident. The man’s vehicle was located at a residence on Cotesby Lane, and it was determined that he entered the community by tailgating another vehicle. CCPD arrested the individual, and he was charged with entering auto. As a reminder, please make sure your valuables are secured and your homes and vehicles are locked. Suspicious persons or incident such as this should first be reported to Chatham County Police Department and then to TLA Security.

CCPD and Security responded to a residence on Sounding Point Retreat for a report of theft on Saturday, April 9. The resident advised that several pieces of jewelry were missing. At the time of the report, the resident was not sure of the value of the missing pieces. The only person in the home recently had been a home health worker. CCPD is investigating.

Security responded to Pensyre Retreat on Friday, April 8, for a report of a suspicious person. The complainant advised that a man she did not know knocked on her door. When her husband answered the door, the man just stood there. When asked if he needed help, the man said he wasn’t sure and possibly had the wrong home before walking off. Security patrolled the surrounding area and did not locate anyone matching the man’s description. No further incidents were reported.

On Monday, April 11, Security responded to a residence on Saltwater Way for a report of a suspicious person. The resident stated she had seen a person running into the bushes. Security officers patrolled the area with negative results. No further incidents were reported.

On Thursday, April 7, Chatham Emergency Services (CES) and Security responded to a residence on Moonglade Lane for a structure fire. Upon arrival, there was no sign of fire or smoke in the area. CES determined that it was something electrical in the walls, and Georgia Power was notified. 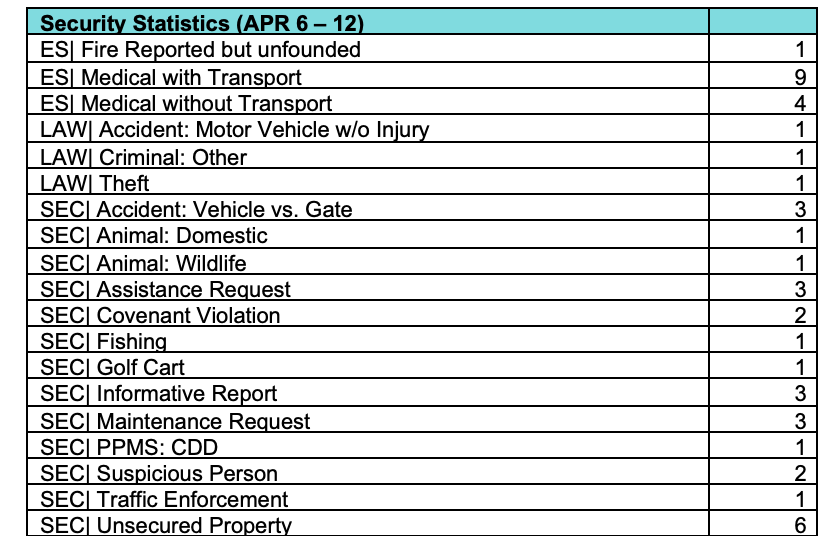 This article was originally published by The Landings Association on their website. Visit landings.org to read the original article. https://landings.org/news/2022/04/15/security-scene