Security and Chatham County Police Department (CCPD) responded to a residence on Tomochichi Lane for a report of a burglary on Thursday, February 3. The resident stated that one of his side windows was open and the screen had been slashed. Upon inspecting the home, the resident found a handgun, a leather jacket valued at $500, and two sweaters valued at $100 each were missing. The resident believes the window was unlocked, as only the screen was damaged. It is unknown when the incident occurred. However, the resident believes the suspect is someone known to them.

On Friday, February 4, Security, Chatham Emergency Services (CES) and CCPD responded to Bartram Road and Lillibridge Crossing for a submerged vehicle in the lagoon. Upon arrival, the driver of the vehicle already had been pulled from the water. The driver was arrested and charged with DUI. The vehicle was removed via tow truck.

Security and CCPD responded to a minor vehicle accident on Tidewater Way inside the Main Gate at the yield intersection between a resident and a guest on Tuesday, February 8. The guest entered the road from the yield sign and sideswiped the resident’s vehicle, causing damage to the driver side rear panel. CCPD cited the driver for failure to maintain lane. Additionally, the guest’s driver’s license was suspended, so she was not allowed to drive the vehicle. A security officer parked the vehicle in the Main Gate parking lot until someone could pick it up.

On Sunday, February 6, a resident stopped at the Main Gate to report a dog attack between her dog and another dog. She stated that she was walking her dog on Blackbeard Lane and walked up a driveway to get a better look at something. Upon entering the driveway, a dog ran out of the open doorway of the house and attacked her dog. In the process of trying to stop the attack, the resident sustained a cut on her finger. The owner of the attacking dog realized what was happening and stopped the attack. The complainant’s dog sustained some surface wounds, but otherwise, appeared to be okay. She stated she was taking the dog to the vet to be on the safe side. The incident report was forwarded to Chatham County Animal Services.

Security responded to Bluff Oak Retreat on Saturday, February 5, for a report of a suspicious incident. The resident informed the officer that she had been at one of the clubhouses the previous day, and upon returning home, found that she had a flat tire. When she took the tire to be repaired, a spent bullet casing was removed from the tire. It is unknown how or when the incident occurred.

On Monday, February 7, Security and CCPD responded to a residence of Caisson Crossing for a possible burglary in progress. The resident believed there was a burglar in her home and went to a neighbor’s to call Security. Upon entering the residence, CCPD found it was actually the housekeeper in the home. No further actions were taken. 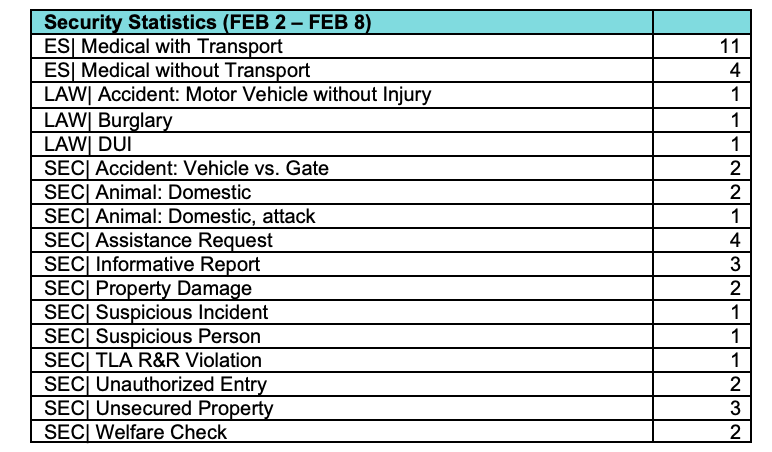 This article was originally published by The Landings Association on their website. Visit landings.org to read the original article. https://landings.org/news/2022/02/11/security-scene