Security and Chatham County Police Department (CCPD) responded to Whitetail Lane for a report of two individuals on the scene with weapons on Friday, January 28. CCPD officers were already on the scene when Security arrived. CCPD informed Security that they received a report of an individual with a knife and an individual with a gun standing off against each other. One of the involved parties was a resident with a history of confronting individuals he felt were trespassing on his property, and the other person involved was a surveyor. When CCPD arrived, the individuals were separated. No arrests were made, and no one was injured. The surveyor returned the next week and was escorted to the property by TLA Security to complete their work without incident.

Security and Chatham Emergency Services (CES) responded to a residence on Waterway Drive on January 31 for a report of a smoking grill. CES found some smoldering and a small fire under the grill upon arrival. The fire was contained, and there were no damages or injuries reported.

On Wednesday, January 26, Security responded to a residence on Landings Way South for a report of property damage. The resident advised that a lamp post in her yard had been damaged a week or two before contacting Security. The lamp had already been repaired at the time of the report. At the time of the incident, the resident stated glass shards were clustered in multiple locations, indicating that someone intentionally knocked it down. No suspects have been identified.

The radar placard on Landings Way South just North of Westcross captured Northbound traffic during January. Some of the data obtained included the following:

Speed bins were as follows:

The posted speed limit for this street is 35 MPH, and the tolerated speed was adjusted to 41 MPH, which means the speed reached before warnings/citations are issued. The highest vehicle counts were on Wednesday, Thursday, and Friday. The vehicle counts increased at 6 a.m. and continued to increase drastically until 9 a.m. Vehicle counts did not begin to decline until after 7 p.m. 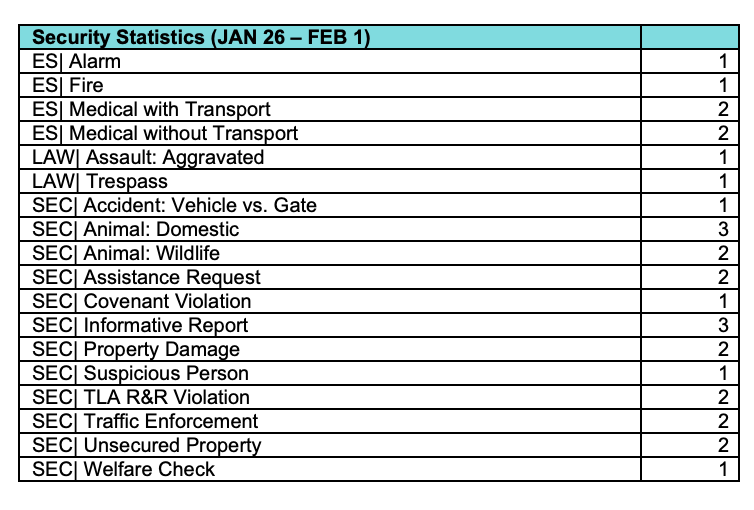 This article was originally published by The Landings Association on their website. Visit landings.org to read the original article. https://landings.org/news/2022/02/04/security-scene