On Sunday, January 23, Security and Chatham County Police Department (CCPD) responded to a residence on Landings Way North regarding a resident who found a bullet hole in the windshield of his vehicle. Upon arrival, the resident stated that he heard a gunshot on Friday evening but did not realize his vehicle had been struck. On further examination, officers noticed a single bullet hole in the rear window and a crack in the front windshield where the bullet had impacted. The resident explained that he had experienced an incident of vandalism approximately two months earlier and was unsure if the two incidents were related. CCPD is investigating. There were no additional reports of property damage in the area.

On Wednesday, January 26, Security spoke with a couple neighbors in the area. One neighbor advised that he heard several gunshots between 11:50 p.m. on Friday evening and 12:30 a.m. on Saturday morning. He did not see anything suspicious at the time and did not report the incident. Another neighbor shared videos from their Nest camera, which caught sounds of several shots. There were a total of eight shots fired. At least one of these shots is believed to be linked to the incident above. If anyone has information about this incident, please contact TLA Security or CCPD. As a reminder, discharging of fireworks, firearms, or any type of weapon on common property is prohibited.

Security received a report of a hit and run accident on Monday, January 24. The complainant advised that a sales guest of The Landings Company had backed into his vehicle and left the parking lot without making contact with anyone. There was damage to the driver’s side front bumper along the front corner of his vehicle. The complainant contacted Security a few minutes later to report that he had made contact with the sales guest, and they agreed to handle the incident between themselves. CCPD was not contacted at the complainant’s request. 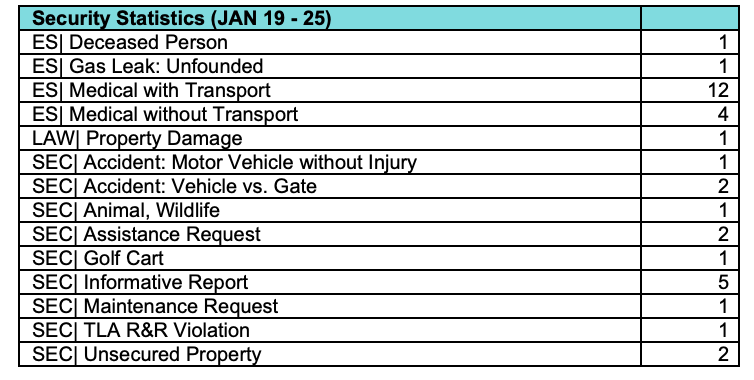 This article was originally published by The Landings Association on their website. Visit landings.org to read the original article. https://landings.org/news/2022/01/28/security-scene