On Wednesday, January 5, Security, Chatham Emergency Services (CES), and Chatham County Police Department (CCPD) responded to the Marshwood Club Pro Shop golf cart parking lot for a report of a gas cart versus pedestrian accident. The golf cart driver was backing out of a parking space and bumped into a pedestrian when he started to pull forward. The pedestrian fell backward and struck her head on the ground. CCPD determined the incident was accidental but did not indicate if a citation would be issued at the time.

Security responded to a residence on Log Landing Road for a report of theft from auto on Sunday, January 9. Upon arrival, the vehicle owner stated she had left the vehicle unlocked in the driveway overnight. When she went to the car in the morning, one of the vehicle’s doors was open, and it appeared someone had rummaged through it. The only thing missing from the car was $8 in cash that had been in her wallet. The homeowner advised that their Ring doorbell system did not pick up anything. The victim declined to file a police report.

Security also responded to a residence on Potters Lane for a report of theft from auto on Sunday, January 9. The resident advised that she was fairly sure the vehicle was left unlocked, and no signs of forced entry were observed. A makeup bag, a pair of gold earrings, two necklaces, and an empty purse were taken from the car. The resident did not have any cameras but stated one of her neighbors did and may have footage. The incident was not reported to CCPD.

On Tuesday, January 11, CCPD apprehended a suspect after he was seen attempting to enter a vehicle at a residence on Dutch Island. The suspect was charged with numerous counts, including Entering Auto, Possession of Stolen Property, Obstruction by Fleeing, and Criminal Trespass. At this time, no physical evidence has linked the suspect to any entering autos on Skidaway Island. You can find the full press release regarding this incident on CCPD’s website (https://police.chathamcountyga.gov/Media/Newsroom). CCPD and TLA Security urge you to lock your doors, especially your vehicles’ doors, and secure your valuables. Also, please be a responsible gun owner and properly secure your firearms.

On Sunday, January 9, Security responded to Butterback Lane for a delayed report of a suspicious person. The resident advised their security camera captured an unknown person walking up their driveway at approximately 5:30 a.m. The individual was wearing dark clothes and had their head, face, and hands covered. The resident advised that nothing was missing from the property. A nearby neighbor informed Security that someone had rummaged through her purse and briefcase in her vehicle at some point during the night, but nothing appeared to be missing. CCPD was not contacted regarding the incident due to the poor quality of the video and no identifiable attributes.

A resident stopped at the Main Gate on Tuesday, January 11, to notify Security that his golf cart had been vandalized recently. The resident stated that his cart battery had died on Friday night, so he left the cart parked on Landings Way North near Tidewater Way. Upon returning the following day to get the cart, he discovered that the windshield was missing, and three tires had been slashed. The resident declined to file a police report.

In December 2021, the Chatham County Commission voted to fully fund Chatham Fire Department, Fire Operations, effective January 1, 2022. As such, subscription mailings have stopped, and residents will no longer receive annual subscription invoices from Chatham Emergency Services. The amount due will be on your property tax statement from the County going forward. For more information concerning your fire services, please visit https://chathames.org/faq/. 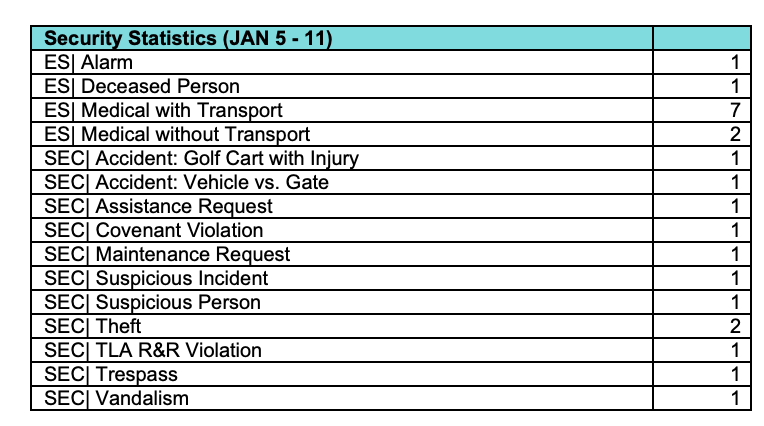 This article was originally published by The Landings Association on their website. Visit landings.org to read the original article. https://landings.org/news/2022/01/13/security-scene