At approximately midnight on Wednesday, December 29, Chatham County Police Department (CCPD), Chatham Emergency Services (CES), and Security responded to a traumatic injury involving a firearm near Landings Way South and Cotton Crossing. One person was deceased upon arrival, and no other parties were injured in the incident. The scene was cleared by CCPD, and no evidence at this time indicates criminal actions.

Security responded to The Landings Association's Community Park for a report of vandalism on Tuesday, December 28. The men's restroom toilet was pushed over and leaking water into the women's restroom and utility closet. Utilities, Inc.'s 24-hour line was contacted regarding the leak, and the toilet valve was shut off to stop the water flow. No suspects have been identified.

A video of five young people was posted online in an effort to identify persons involved in misuse of Association Property. One juvenile resident identified himself as one of the participants, and TLA staff are discussing restitution and community service with the parents and the juvenile.

On Sunday, December 26, Security responded to Delegal Creek Marina regarding a dog bite. A resident advised that he had been bitten by a dog while on the pier. He sustained approximately four small punctures on his hand, but he stated that he did not need medical attention. The dog's owner is working with the resident to provide the necessary documentation of the dog's shot records. CCPD Animal Services was notified of the incident.

On Tuesday, January 4, Security responded to a residence on Schroeder Court for a report of a suspicious vehicle/golf cart on the golf course. The complainant advised he had seen a light flashing into his home from the golf course, which had happened in the past. A patrol of the surrounding area was conducted with negative results.

Security responded to Landings Way South in the Delegal area on Sunday, December 26, for a report of a suspicious van driving slowly in the neighborhood. While patrolling the area, an officer spotted the vehicle and made contact with the driver, who stated he was delivering newspapers. A check of the ABDi database revealed the car was registered to the Savannah Morning News. The complainant was advised of the findings.

Security responded to a noise complaint on Pettigrew Drive on Saturday, January 1. An officer patrolled the surrounding areas with negative results. 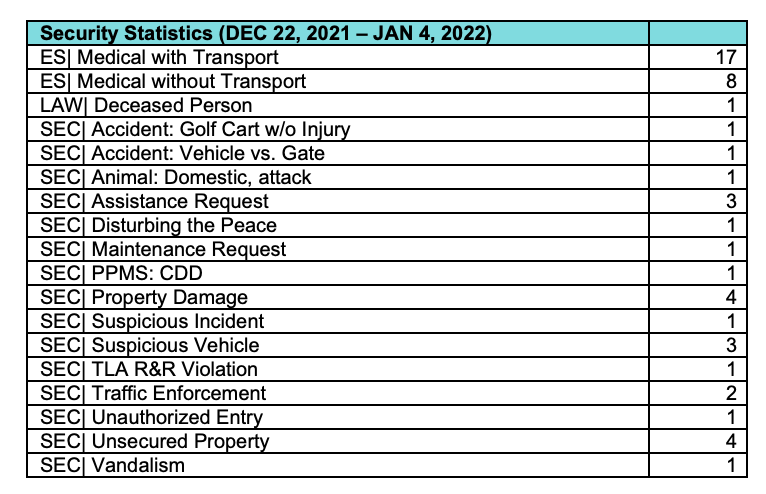 This article was originally published by The Landings Association on their website. Visit landings.org to read the original article. https://landings.org/news/2022/01/07/security-scene