On Sunday, December 12, Security and Chatham County Police Department (CCPD) responded to Westcross Road for a single-vehicle accident. The vehicle struck a tree head on from the eastbound lane. The driver stated he remembered pulling up to the stop sign at the intersection of Westcross Road and Franklin Creek Road South but does not remember anything after. The driver was treated on scene and transported to the hospital. CCPD cited him for failure to maintain lane. A tow truck was called to remove the vehicle from the scene.

Security responded to a residence on Crazy Possum Lane on Wednesday, December 8, for a report of theft. The resident explained that he had gotten a notification from UPS on Monday, December 6, stating that his package had been delivered. When he checked later in the day, the package was not on the porch. It is unknown who took the package. The resident stated he would inquire with his neighbors to see if anyone had a camera that may have caught something.

On Thursday, December 9, Security responded to Button Lane for a report of theft. Upon arrival, the resident advised that her lawn mower was in the front yard on the side of the house near the curb because the battery had died. She went inside to retrieve a fully charged battery and stated she was in the house for approximately 10-15 minutes. When she came back outside to change the battery, the lawnmower was gone. She believes it may have been mistaken for bulk trash since the pickup was the following day. The lawnmower is valued at $1,200.

A resident on Cloverwood Court contacted Security on Monday, December 13, to report a theft. The resident advised that UPS delivered a package on Friday, December 10. The resident stated he and his wife left to go shopping and did not notice the package. Upon returning around 4:30 p.m., he saw the notification from UPS about the delivery. When he checked for the package, it was missing. It is unknown who took the package. 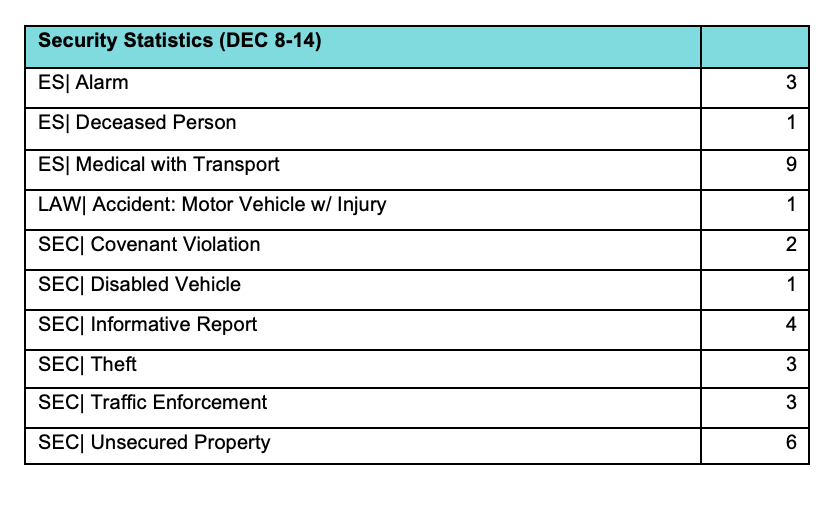 This article was originally published by The Landings Association on their website. Visit landings.org to read the original article. https://landings.org/news/2021/12/17/security-scene