As the Holiday Season is upon us, the workload for Officers at the Main gate has increased significantly. Please, assist us by pre-authorizing your expected guests, vendors, and deliveries (Uber, Lyft, Uber Eats, Door Dash, Instacart, etc.) by logging into www.GateAccess.Net or using ABDi’s smart app. Once logged in, it’s simple!

The Community Code is TLA

Your Password is your Personal Identification Number (this is TLA’s PIN, not your Club number)

Allegations of criminal behavior at Marshwood

The Club’s management responded to allegations of criminal behavior at Arnie’s Tavern, and the matter is being investigated by Chatham County Police Department.

On November 17, Security responded to Marina Drive and Delegal Road for a vehicle and bicycle accident. Medical assistance was refused, and Chatham Country Police Department responded.

On November 22, Security responded to a suspicious person call. A resident reported a person wearing what appeared to be a ski mask looking into her window. A canvass of the area was performed with negative results.

A resident returned home after being gone for several months to find his golf cart had been used and sustained damages. No signs of forced entry were present, and nothing else was reported as being suspicious, missing, damaged, or out of order. Security and Club staff attempted to identify persons who may have used the cart, but the results were inconclusive. The resident chose not to report the incident to local law enforcement.

Security personnel are working with Chatham County Police Department, Department of Natural Resources, and Skidaway Island Oceanographic Institute (SKIO) to identify persons firing firearms on the Institute’s property and at the end of OSCA Road, and possible illegal hunting on private property. While investigating, a South Harbor resident dressed in camo and believed to be archery hunting was questioned. He is currently being investigated for possible charges of illegal hunting, trespassing, burglary, and theft from a vehicle based on evidence collected and video footage from the SKIO property.

Security personnel intervened in a road rage incident that started at the 4-way stop. Allegations of one driver running the four way stop signs, and another driver cutting them off were de-escalated. Residents are reminded to not take matters into their own hands. Patience and distance are your best bet. Give the vehicle space and avoid contact or senseless continued honking of your horn. Too often, a victim in such incidents then becomes the primary aggressor, and instead of de-escalating a situation it spirals to the next level.

On November 18, Security issued a Towing Notice at The Landings Harbor for a boat that was illegally left in the Harbor’s parking lot. The boat and trailer were later removed, and towing was not necessary. 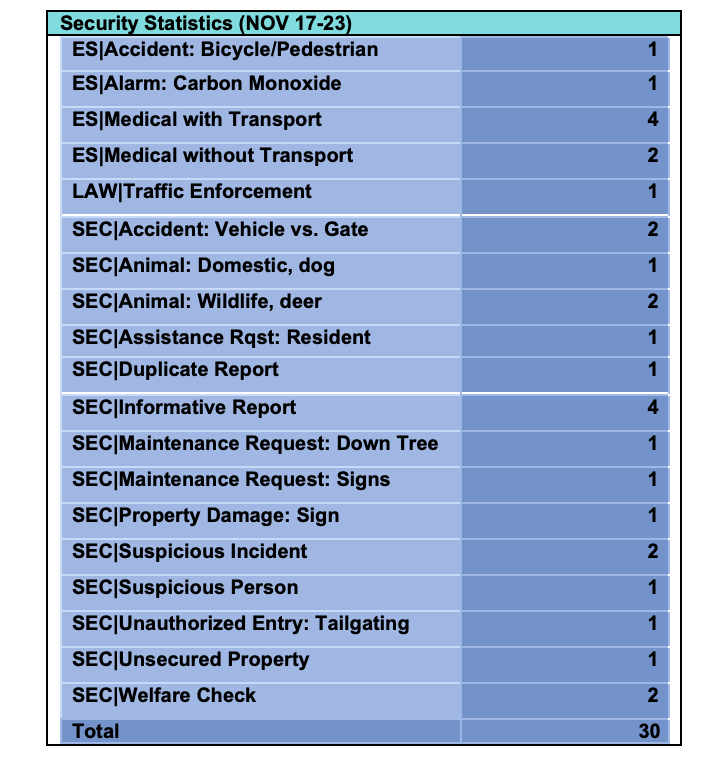 This article was originally published by The Landings Association on their website. Visit landings.org to read the original article. https://landings.org/news/2021/11/26/security-scene