On Wednesday, October 27, Security and Chatham Emergency Services (CES) responded to Landings Way South and Rookery Road for a bicycle accident. The resident was treated on scene for his injuries and did not require transport to the hospital. A second resident on scene advised that she was taking a right turn onto Landings Way South from Rookery Road, and after making the turn, she noticed the cyclist lying on the ground. The exact cause of the accident was not clear.

A resident contacted the Main Gate on Sunday, October 31, to report a hit and run accident between two golf carts on Camberwell Place. The resident stated that a golf cart was in the middle of the road and side-swiped his golf cart. It then kept driving and never stopped. The side mirror on the other cart was broken off during the incident and struck his passenger in the face. Unfortunately, the other cart number could not be obtained during the incident. Security patrols checked the surrounding areas for a golf cart missing a side mirror, but the cart was not located. Residents are reminded leaving the scene of an accident with injuries or property damage is a crime.

On Monday, November 1, Security spoke with a resident on Wiley Bottom Road concerning an incident between a neighbor’s dog and her dog. The resident advised that she had taken her dogs outside around 8 a.m. the previous morning, and a dog from a nearby residence entered her yard and attacked one of the dogs. Her dog sustained multiple injuries and was taken to the emergency vet for care. The resident went on to explain that the same dog had attacked a different one of her dogs last winter, and the incident was not reported to Security or Chatham County Animal Services. The dog’s owner took full responsibility for the previous incident and paid for the vet care. Security attempted to contact the dog’s owner with negative results, and the case was turned over to Animal Services.

On Wednesday, October 27, Security responded to Willeford Drive and Bartram Road for a report of a suspicious person. Patrols check the surrounding areas with negative results.

Security responded to a residence on Caisson Crossing for a report of possible vandalism on Friday, October 29. Upon arrival, the residents stated they noticed an outside bench had been broken, a bird bath that had been tipped over, and a paver that had been shifted. The responding officer noticed several large hoof marks as well as fresh deer scat. After examining the area, the officer believed that a deer altercation occurred (it is mating season), which caused the damage and disturbance to the property. The residents were contacted with the findings.

On Saturday, October 30, Security responded to Shellworth Crossing for a report of a suspicious person. The complainant reported seeing a woman wearing a heavy coat and backpack walking around their property on their security cameras. Security patrolled the area with negative results. The officer also checked to make sure the resident’s home was secured and did not observe any suspicious activity.

On Saturday, October 30, Security and Chatham County Police Department (CCPD) responded to a residence on Candlewicke Lane for a noise disturbance. Upon arrival, the resident explained that some uninvited guests showed up to her teenager’s party and attempted to start an altercation. The resident advised the individuals to leave the area. Upon the officers’ arrival, the situation already had been resolved.

Security provided 29 additional staffing hours for the North ACF in support of The Club hosting the Korn Ferry Tour Q-School Finals at the Marshwood Club this week. 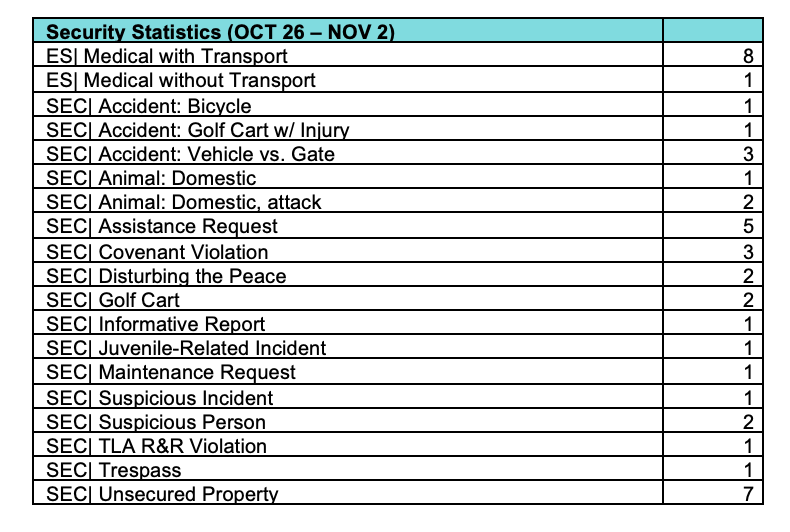 This article was originally published by The Landings Association on their website. Visit landings.org to read the original article. https://landings.org/news/2021/11/05/security-scene