On Saturday, October 23, Security and Chatham County Police Department (CCPD) responded to a two-vehicle accident without injuries in the outbound lane just past the Main Gate. As the first vehicle turned in front of the Main Gate, the driver struck the second vehicle as it exited the community. The driver stated that his dog had jumped in his lap, so he did not see the second vehicle. Both cars sustained damages but still were drivable. CCPD cited the first driver for failure to yield while making a left turn and not having a driver’s license.

Security denied entry to a guest on Sunday, October 24, as the resident had removed the individual from their list of preauthorized guests. Shortly after the man was denied entry, Security witnessed him entering the community on foot via the cart path next to the Main Gate. An officer made contact with the man and explained that he could not come into the community without being preauthorized. The resident was contacted, and they stated the man could come to their residence to pick up his belongings. Security escorted him to the resident’s property.

On Thursday, October 21, Security responded to a residence on Bartram Road for a suspicious incident. The resident advised that she noticed two men throwing rocks into the lagoon behind her home, so she stepped outside to ask what they were doing. After her interaction with the men, she noticed they were walking near her residence, and one came close to her front door. Security patrolled the surrounding area looking for individuals that matched her description. The officer spoke with three individuals at a nearby residence, but they stated they had not been near the lagoon, and positive identification could not be established. Security continued patrolling the area with negative results.

Security received a report from Club Management that a call from a Security Officer displayed “Debt Solutions” on the caller ID. The call was traced and verified to originate from a landline at the Main ACF. Although several tests were conducted with landlines at the Main ACF, we could not duplicate a similar spoofed caller ID. Mitel was advised of the incident and is looking into the possible cause.

Security and CCPD responded to a residence on Tidewater Way for a noise complaint on Sunday, October 24. The resident advised that their daughter was having a party, and they would turn the music off and keep the noise to a minimum. After additional complaints were received, CCPD shut down the party. 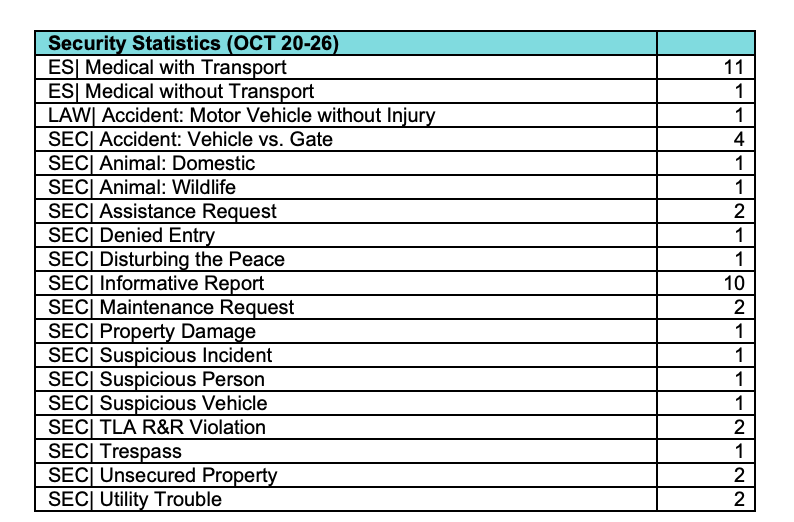 This article was originally published by The Landings Association on their website. Visit landings.org to read the original article. https://landings.org/news/2021/10/29/security-scene