On Monday, September 27, Security responded to the Shell rake on Peregrine Crossing for a report of vandalism. Upon arrival, the officer observed a sign laying on the ground and two metal posts that had been spray painted multiple colors. A SeeClickFix was submitted to report the incident to Public Works for repairs.

A resident on Salette Lane contacted Security on Friday, September 24, to report a suspicious incident. The resident stated that he had left his home from approximately 3:45 to 8:15 p.m., and upon his return, he found his garage door halfway up and the front door slightly ajar. He did not notice anything missing when he performed a walkthrough of the residence. However, he did find evidence of someone being in the home. The resident advised that he did not want to make a report with Chatham County Police Department (CCPD) at the time as he was having some interior renovations done and wanted to check with the contractor to see if they had come by unexpectedly. No signs of forced entry were observed.

On Tuesday, September 28, a resident reported that he had witnessed a knife come from a vehicle in front of him in the area of Tidewater Way and Landings Way North. Security responded to the area and retrieved the knife from the roadway. The vehicle’s owner was identified. At the time of the report, it was too late for Security to contact the vehicle’s owner to obtain further information regarding the incident.

Below are a few of the key take-ways from the conference: 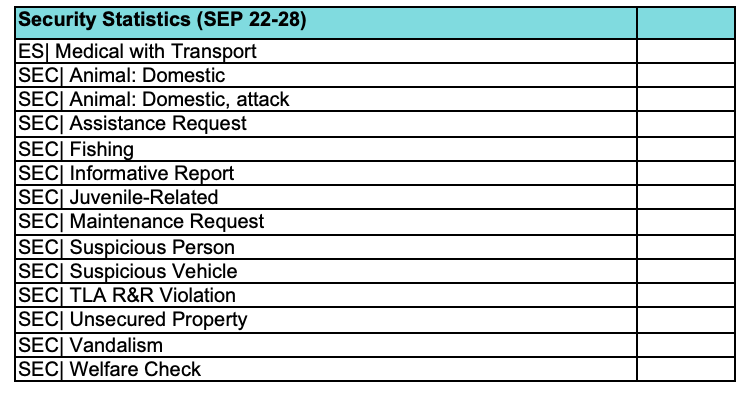 This article was originally published by The Landings Association on their website. Visit landings.org to read the original article. https://landings.org/news/2021/10/01/security-scene