The Hook Race is the only open ocean water sailing event in the Low Country.  While many area boat clubs host annual regattas in inland waterways, the Hook offers the opportunity to compete in open ocean waters for several hours, which historically was a large part of sailboat racing.

“Despite the ongoing challenging times we are all facing, we were so pleased to host the Hook Race again this year, bringing together our regional sailing community for an exciting day on the water, and bringing attention to the great coastal resources and the waterfront activities that we enjoy here year-round,” noted Doug Powelson, Race Chair.

SIBC is extremely grateful to the sponsors of the 2021 Hook Ocean Race: 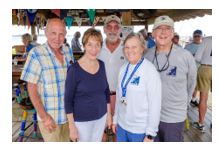 Competitors in the Low Country Hook Ocean Race ride high on the approach to the finish line at Landings Harbor Marina.

A big red spinnaker catches the ocean breeze during a past Low Country Hook Ocean Race, where competitors sailed from Hilton Head, around Tybee Island and back up to the Wilmington River to Landings Harbor Marina.

This article was originally published by The Landings Association on their website. Visit landings.org to read the original article. https://landings.org/news/2021/09/27/skidaway-island-boating-club-and-yacht-club-hilton-head-island-host-sixth-annual