Tim Cook, Erica Kersey, Jill Waclawski, and Chad Bundy will be traveling to Orlando, FL, next week for the GSX Conference. The conference offers industry-specific seminars and vendor expos. Staff will have limited access to email during their trip from Sunday, September 26 to Thursday, September 30. Cpl. Hill, Cpl. Haile, and Sgt. Roberts will ensure that daily activities and/or issues are handled. Should you have immediate concerns during their absence, please email security@landings.org or contact the Main Gate at 912.598.1982, option 2 or option 3 for emergencies.

On Saturday, September 18, a resident contacted Security to report a dog versus dog incident, which occurred the previous day at the Dog Park. The resident stated that two other dogs attacked his dog at the park, and when his wife attempted to break up the fight, one of the dogs bit her on the hand. His dog sustained multiple injuries during the fight. The owner of the dogs already had taken care of medical treatment for his dog.

On Friday, September 17, Security responded to Cotton Crossing for a report of vandalism. Upon arrival, the officer noticed spray-painted drawings on the moisture barrier wrap on the exterior of a house under construction. The property owner did not wish to file a report with Chatham County Police Department (CCPD).

Security responded to Cedar Marsh Retreat for a report of a Waste Management employee walking through residents’ backyards with trash cans on Monday, September 20. Upon arrival, the waste truck had already left the area. The officer patrolled the Deer Creek area until the truck was located. The officer made contact with the employee, who advised that he was getting trash cans from service yards but did not walk through anyone’s property.

On Saturday, September 18, Security responded to Delegal Retreat for a report of a suspicious vacant vehicle. The vehicle was registered to a Landings resident. The officer checked the area for the vehicle’s owner but did not see anyone. The Main Gate attempted to contact the resident but was not successful. The complainant was advised of the findings. Subsequent patrols of the area confirmed the vehicle was removed.

Security responded to Landings Community Park for a suspicious incident on Saturday, September 18. The complainant advised that some juveniles had been playing on the field with what appeared to be samurai swords. The juveniles had already left the area on a golf cart before the officer’s arrival. The complainant was unable to provide a description of the individuals, the cart number, or the direction in which they had left. Security patrolled the surrounding area with negative results. 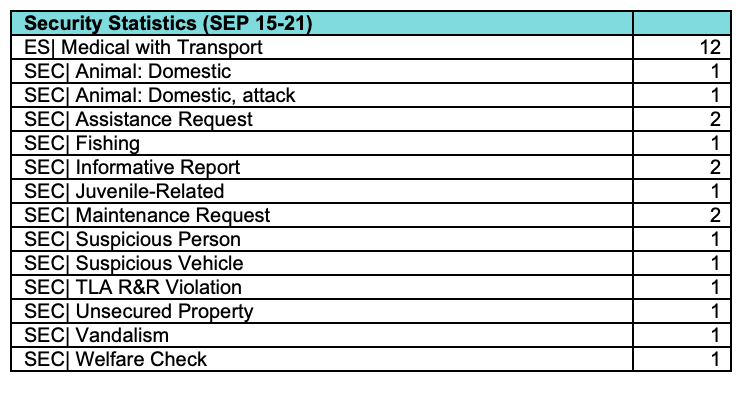 This article was originally published by The Landings Association on their website. Visit landings.org to read the original article. https://landings.org/news/2021/09/24/security-scene