On Tuesday, August 10, a resident on Morning Marsh Road contacted Security to report that a “For Sale by Owner” sign was missing from her property. She advised that she had noticed over the past few weeks that the sign had been moved or knocked down on several occasions. It is unknown who may have taken the sign. The resident contacted the Community Development Department to obtain a new sign. Security will perform extra patrols in the area.

Security responded to Landings Harbor on Saturday, August 7, for a report of gunshots. The complainant advised that he had heard 6 to 8 gunshots on two different occasions. He also advised that the shots seemed to be coming from the area at the end of O.S.C.A. Road. Security checked the area and observed several shell casings on the ground. Chatham County Police Department (CCPD) was notified, and they are investigating. Residents are encouraged to first call CCPD for such matters and then call Landings Security.

On Wednesday, August 4, Security responded to Breakfast Court for a report of two juveniles spraying shaving cream on the mailbox and front door of a vacant residence. The complainant advised that she attempted to make contact with the juveniles, but they left the area on a golf cart. She was able to provide a golf cart number, and Security made contact with the owner of the cart regarding the incident. Security learned the individual driving the cart at the time of the incident was 13 years old. A warning for vandalism and a $100 fine for unlicensed driving was issued to the juvenile’s parents. 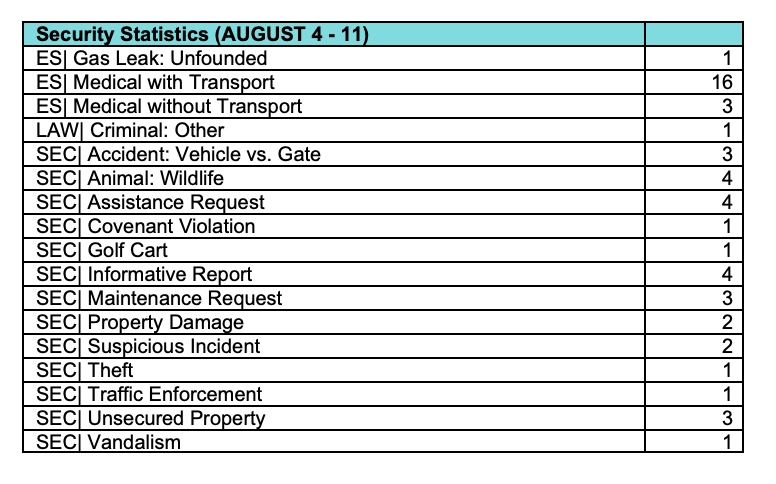 This article was originally published by The Landings Association on their website. Visit landings.org to read the original article. https://landings.org/news/2021/08/13/security-scene