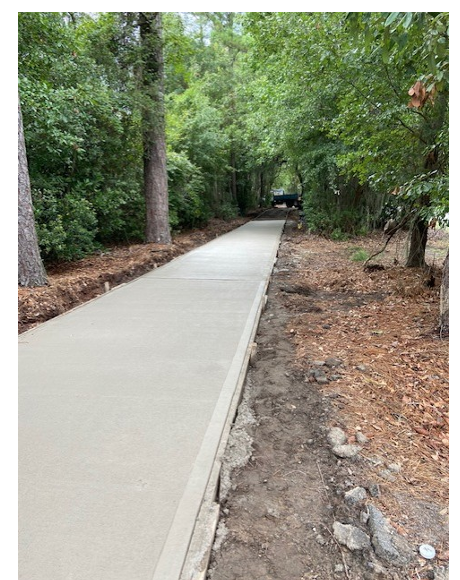 On Tuesday, Georgia Power called to let staff know that the sport lighting fixtures (that will replace the existing field lights) are on back order. The light fixtures are anticipated to ship late September/early October.

Absolute Concrete continued to work on the conversion of path from The Village to Sundew Road this week. This section of path is taking longer to complete than originally anticipated due to the amount of rainfall the island has received this month.

This week, Southeast Pipe began working on the pipe failure located at 20 Coventry Close.  Barring any delays, the contractor anticipates completion within a week.

On Monday, Sean Burgess, Bill Campbell and Amber Capps met with Chris Steigleman with The Landings Club to discuss the ownership and responsibility of the storm drain infrastructure within the community.  Over the last several years, both entities have been formulating agreements involving ownership and maintenance responsibilities of community paths, lagoon structures and storm drain infrastructure.  Staff is in the process of compiling a draft agreement with an outline on how TLA and TLC will handle storm drain pipes that cross both properties and/or tie into each other’s pipes. Thereafter, this agreement will then require review and approval from both organizations and our Board of Directors.

On Wednesday, in-house staff installed the new monument sign at the Moon River entrance. The monument sign was purchased by Dan Design in the amount of $7,500 (total project cost was $7,800 with a contingency for 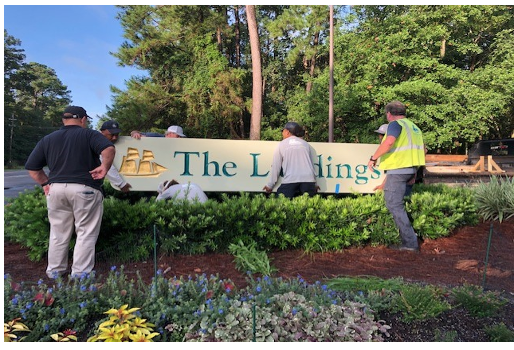 landscape repairs during installation). The project was approved by the Finance Committee, Public Works Committee and Board of Directors in February and funded through Capital Reserves.

This article was originally published by The Landings Association on their website. Visit landings.org to read the original article. https://landings.org/news/2021/07/30/public-worksworking-you