Security, CES, and CCPD responded to Landings Way North and Hunting Lane on Tuesday, July 12, for a single-vehicle accident with injuries. Upon arrival, officers found that vehicle had crashed into a tree. The driver of the vehicle was transported to the hospital for medical attention. The cause of the accident is unknown, and Georgia State Patrol (GSP) is investigating.

On Wednesday, July 7, Security and CES responded to The Deck for a report of an accident involving a golf cart and bicycle. The golf cart driver had backed his cart out of a parking spot when the bicyclist ran into the golf cart and fell off the bicycle. Witnesses stated that the cyclist was not paying attention to where he was going at the time of the incident. The cyclist was treated on scene for injuries.

Security responded to the area near Lagoon 15 at Wiley Bottom Road and Landings Way North for a report of a suspicious incident on Tuesday, July 13. The complainant reported seeing a man entering the wood line with what appeared to be a bow and arrow. Upon arrival to the area, officers located the man, who was carrying a piece of a palm tree. He advised that he was searching the area for his son to build a fort and apologized for any confusion before leaving the area.

On Friday, July 9, Security personnel and members of the Security Committee conducted the first Courtesy Safety Inspection (CSI) event near the Franklin Creek campus. A total of 32 golf carts were inspected, three cart registrations were transferred to new owners, and one warning was issued for unlicensed driving. Be on the lookout for more CSI events in the future as we continue our efforts to increase awareness, safety, and compliance. 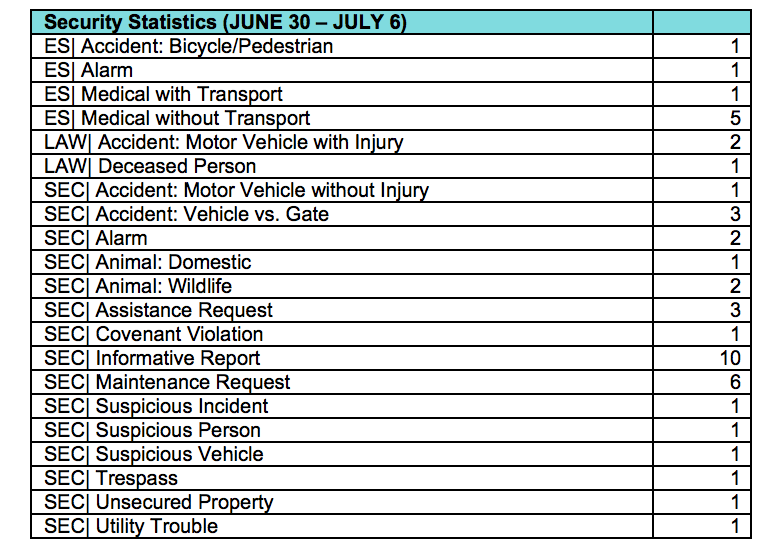 This article was originally published by The Landings Association on their website. Visit landings.org to read the original article. https://landings.org/news/2021/07/16/security-scene