Security responded to a residence on Wiley Bottom Road on Friday, June 11, for a report of a theft. The resident advised that a replica “Bird Girl” statue valued at approximately $450 was stolen from her front yard. Although she had a Ring Doorbell camera pointed towards the statue, she recently had cleared all the videos from the system and had no record of the theft. The resident did not wish to file a report with Chatham County Police Department (CCPD).

On Monday, June 14, a resident on Boars Nest Lane reported a theft. The resident stated that she noticed her battery tender, a device used to maintain a car battery’s charge, was missing from her garage. She was not sure when the device went missing as she had not needed to use it for a while. The item is valued at approximately $60. The resident did not wish to file a report with CCPD.

A home health worker stopped at the Main Gate on Thursday, June 10, to report an altercation between herself and two men who had entered the gate just before she had. The woman stated that she was behind the vehicle when it pulled over to allow her to pass and began following her. She stated she inadvertently turned down a dead end road to get away from the vehicle, the vehicle blocked her from leaving and two men began confronting her. The woman called 911 for assistance and the two men left the area. A review of the Avigilon video system allowed officers to identify the vehicle and cross reference the ABDi database to see where the driver was going at the time. A follow-up was made with the individual who stated he did not recall all the details but believed the woman had cut them off, which caused their vehicle to run off the road. Chatham County Police Department (CCPD) is investigating.

On Thursday, June 10, Security responded to Wakefield Place for a noise complaint. The complainant advised that she could hear loud music coming from the area. Upon arrival, officers spoke with a vendor on-site who advised that the machinery they were using had been making loud noises, but they had not been playing any music. In case the vendor wanted to play music later, officers reminded him of the rules and left the area. No further incidents were reported. 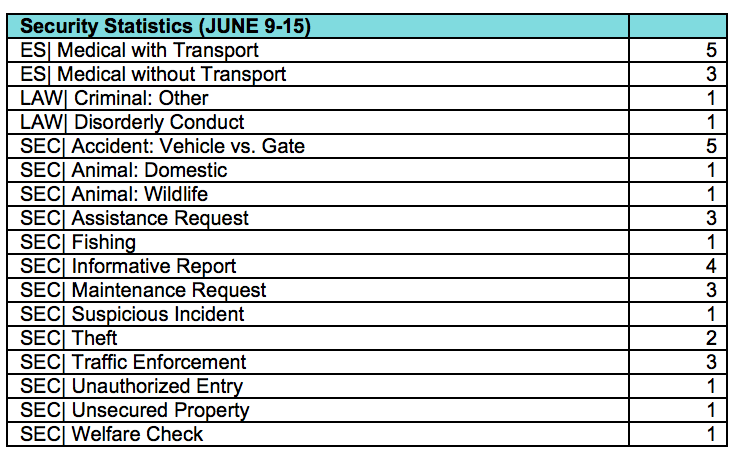 This article was originally published by The Landings Association on their website. Visit landings.org to read the original article. https://landings.org/news/2021/06/18/security-scene