On Saturday, June 5, Security responded to a report of a fire on Isham Lane. Chatham Emergency Services (CES) already was on scene. Security was advised that the garage door motor had begun smoking, and the residents believed it was catching fire. The motor was disengaged before a fire began. No further damages were reported.

Security responded to a residence on Heatherstone Lane for a report of theft on Wednesday, June 2. The resident stated that he noticed his Kiwanis monument flags were missing the previous evening while checking the mail. The monument base still was present. It is unknown who may have taken the flags. No further reports regarding missing monument flags were received.

While on patrol on Friday, June 4, a Security officer observed a white golf cart stuck near the cart path just north of the Main Gate. The driver, a properly licensed juvenile, did not appear to be injured. The driver advised that she was clipped by another cart while driving down the cart. Although the other driver had stopped, she did not get his information. On Monday, June 7, the driver of the other cart stopped at the Main Gate to report his version of the accident and informed officers that his cart had minor damages. Contact was made with the juvenile’s mother who advised that her cart also had minor damages. She stated she did not wish to involve Chatham County Police Department and felt the matter could be handled with their insurance companies.

On Tuesday, June 8, Security responded to a residence on Sky Sail Circle for a report of a suspicious incident. The renter reported that someone had entered the residence while he was out of town. A video from the Ring Doorbell camera showed a man with his arm in a sling walking up to the door, inserting a key, and walking into the home. The man leaves the residence approximately three hours later. The officer informed the shift supervisor of the incident, and the supervisor recognized the individual as a handyman for The Landings Company. The renter and homeowner both were informed of the findings. 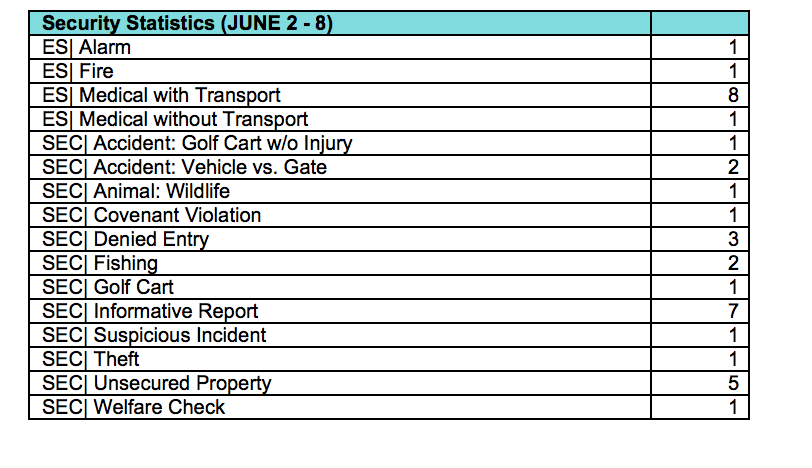 This article was originally published by The Landings Association on their website. Visit landings.org to read the original article. https://landings.org/news/2021/06/11/security-scene