Security, Chatham Emergency Services (CES), and Chatham County Police Department (CCPD) responded to Lake Street for a vehicle verses golf cart accident on Thursday, May 6. The driver of the golf cart was treated on location for injuries but was not transported to a hospital. Since CCPD already was on scene when Security arrived, the Security officers assisted with traffic control while CCPD officers took over the incident.

On Wednesday, May 5, Security responded to a noise complaint in the area of Tarrow Ridge and Westcross Roads. Upon arrival, the officer was able to locate where the disturbance was and made contact with the resident. The resident apologized and stated they would keep the noise down. There were no further reports that evening.

On Tuesday, May 11, Security responded to the Moon River area for a report of two suspicious individuals standing near the river in the backyard of a home on Waterway Drive. Upon arrival, the complainant informed the responding officer that the individuals had left the area. A patrol of the area resulted in negative findings.

Security responded to the lagoon behind the Village Library for a report of possible non-residents fishing on Tuesday, May 11. The area was inspected upon the officers’ arrival, but no one was in the area. No further incidents were reported.

On Friday, May 7, Security responded to a report of a suspicious individual walking down McWhorter Road. The responding officer made contact with an older Caucasian female and inquired if she needed assistance. The woman stated she was fine. She further advised that she was not a resident and was enjoying the beautiful morning. The woman continued to walk down McWhorter Road past the Marshwood and Deer Creek North gates without entering the community.

** Please note that a brief synopsis is provided for pertinent incidents that Security responds to during the week. All incidents are not covered in the weekly recap. Statistics for all reports are provided below.** 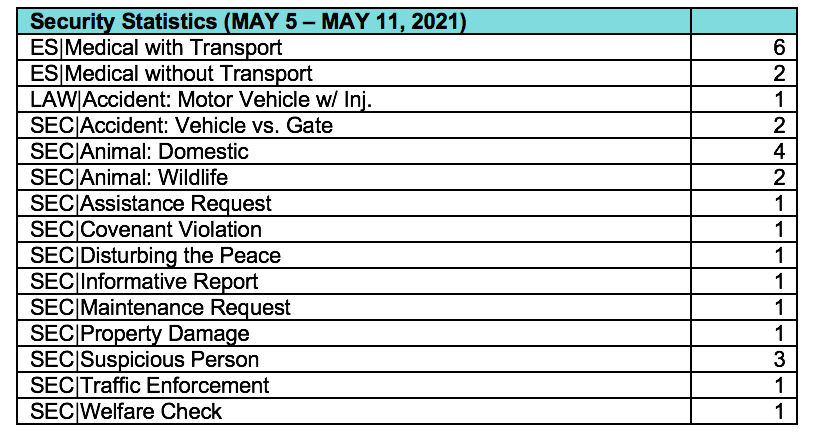 This article was originally published by The Landings Association on their website. Visit landings.org to read the original article. https://landings.org/news/2021/05/14/security-scene