Security received a report from a resident on Sparnel Road on Saturday, May 1, regarding two large urns being stolen from her property. The resident stated that the urns were on the side of her property near the service yard, and she last recalled seeing them approximately two or three weeks prior to the report. Due to the location of the urns, the resident believes that either her lawn care company or the trash company may have taken them. The incident was not reported to Chatham County Police Department (CCPD) at the owner’s request.

On Monday, May 3, a resident on Turtle Lane reported a missing trash can. The resident advised that he saw the trash can around 9 a.m., and by 10 a.m., it was missing. He also stated that a different company came to pick up the trash that morning, but he was not sure which company it was.

Security responded to a residence on Tidewater Way for a report of theft on Monday, May 3. The resident informed Security that he noticed his air conditioner was not working on Saturday, May 1. When he checked the outside unit, he found that someone had pulled the switch out of it and drained approximately 4 pounds of coolant. The resident stated that he was unsure of who would have removed the coolant. The incident was not reported to CCPD at the owner’s request.

On Wednesday, April 28, Security received a report of a vehicle driving recklessly on McWhorter Road. The complainant advised that the vehicle was swerving between lanes and driving into oncoming traffic. The driver of the vehicle entered through the North Gate and eventually parked on a nearby street. Officers made contact with the driver and decided to contact CCPD as the driver’s behavior seemed odd. CCPD determined the individual was not under the influence of alcohol but requested that someone pick her up. Her resident sponsor arrived on scene and picked her up. There were no further incidents. 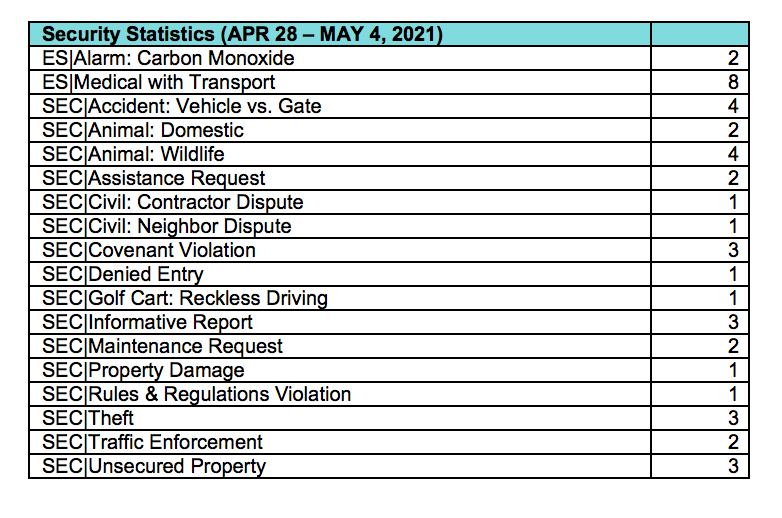 This article was originally published by The Landings Association on their website. Visit landings.org to read the original article. https://landings.org/news/2021/05/07/security-scene