On Friday, April 23, Security, Chatham Emergency Services (CES), and Chatham County Police Department (CCPD) responded to a residence for a report of a domestic dispute. No one was injured, and no arrests were made. There were no further incidents.

Security responded to a single golf cart accident on Monday, April 26, near the Dog Park. Upon arrival, officers observed a golf cart that had crashed into a post. The golf cart appeared to have extensive damage. The driver appeared to be injured but refused medical treatment. Additionally, the driver refused to provide identification, so CCPD was notified. CCPD responded to the scene and took over the incident.

On Sunday, April 25, a resident contacted Security to report an incident involving juveniles damaging property at the Franklin Creek Tennis Center. After a failed attempt to reach The Landings Club’s Loss Prevention, Security notified CCPD, who responded to the scene and took over the incident.

On Monday, April 26, Security responded to Deer Creek Drive for a report of possible gunshots. Officers spoke with the complainant, who stated that he was on his back porch and heard gunshots in the distance beyond the trees behind his home. Officers patrolled the surrounding area as well as the Georgia Power substation, Skidaway Farms, and OSCA Road with negative findings. No further incidents were reported.

Security responded to a residence on Noble Jones Lane for a report of a suspicious incident on Saturday, April 24. Upon arrival, an officer met with the homeowner, who advised that he believed someone had vandalized his property the previous evening. The homeowner showed the officer a tree that he believed was vandalized. The officer was unable to determine if the damage was caused intentionally. No further incidents in the area were reported. 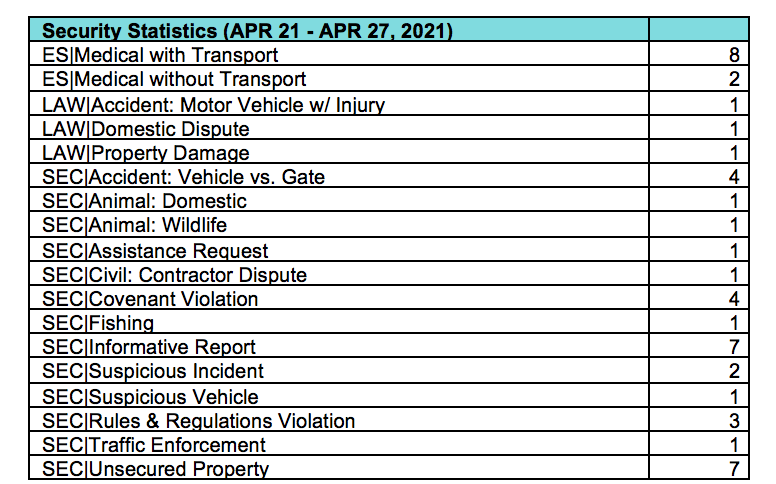 This article was originally published by The Landings Association on their website. Visit landings.org to read the original article. https://landings.org/news/2021/04/30/security-scene