On Friday, April 16, Chatham County Police Department (CCPD) stopped at the Main Gate to advise Security of a missing person. The man left his home earlier in the day to go to Publix but never returned. He eventually was located in Rincon and his wife responded to that location. He was supposed to follow his wife home; however, he exited the highway after a couple of miles and had not been seen since that time. Security checked the ABDi database and found the last RFID entry for his vehicle was on Monday, April 12. CCPD was able to locate the missing person later the same evening.

Security and CCPD responded to the four-way stop at Diamond Causeway and McWhorter Drive on Wednesday, April 14, for a hit and run accident. Upon arrival, officers spoke with the individual who stated that he was turning onto McWhorter Drive when he was struck in the rear passenger tire by a vehicle heading towards the Skidaway Narrows bridge. The man further advised that he pulled his vehicle over to inspect any damage and realized the other driver had not stopped. There was minor damage to the rim of his vehicle, but it still was drivable. Security checked the Avigilon camera system and located one vehicle matching the man’s description leaving the community around the time of the incident. A picture of the vehicle was provided to CCPD.

Security responded to Tidewood Court for a report of two individuals possibly trying to catch alligators behind a residence on Wednesday, April 14. The complainant advised that she tried to speak with the two individuals, but they were extremely rude to her. When a patrol officer arrived, the two individuals had already left the area. No further reports were received. Security later learned from Public Works Environmental Manager Dylan Till that the two individuals were the licensed nuisance alligator trappers designated by the Georgia Department of Natural Resources (DNR).

On Sunday, April 18, Security responded to the wooded area near the nature trail behind TLA for a report of suspicious items found by two juveniles. Upon arrival, the officer spoke with the two individuals, who advised that they found what appeared to be drug paraphernalia in the wooded area near the parking lot. The items found included a lighter, a pipe, a water bottle, a Swisher cigar, cigar wrappers, and a small amount of marijuana found in a plastic sandwich bag stuffed inside a toothpaste carton. Security personnel properly disposed of all the items.

** Please note that a brief synopsis is provided for pertinent incidents that Security responds to during the week. All incidents are not covered in the weekly recap. Statistical data for the week is provided below. ** 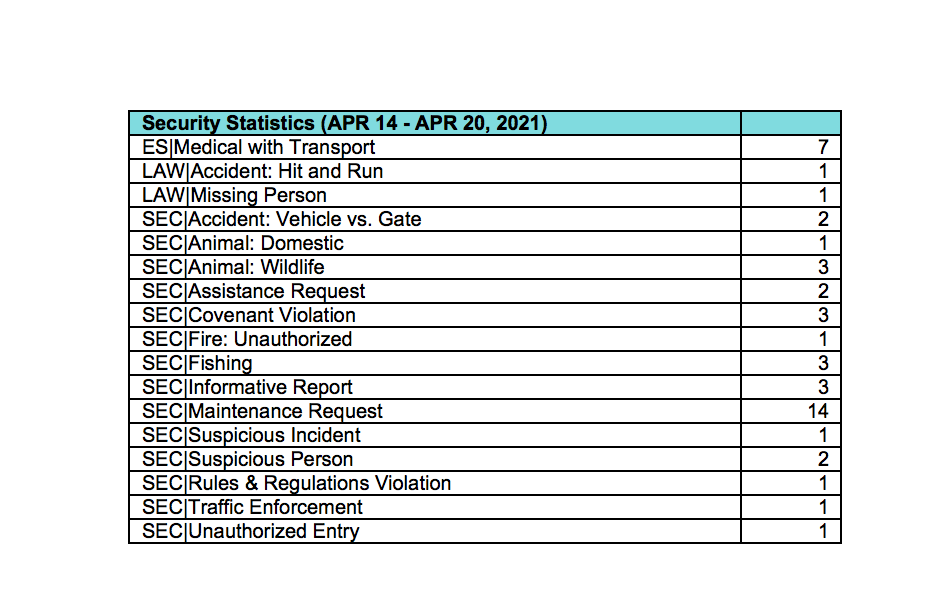 This article was originally published by The Landings Association on their website. Visit landings.org to read the original article. https://landings.org/news/2021/04/23/security-scene