Skidaway Audubon’s Tallow Terrors, a band of chainsaw-wielding volunteers striving to eradicate invasive tallow trees from the island, said good-bye to one of its dedicated workers this month.

Bart Davis, a Tallow Terror for the past 10 years, is moving to upstate New York. On his final day of field work, Davis and the crew took down 154 tallow trees. The Chinese tallow is a fast-growing, invasive tree that can wipe out an ecosystem by forcing out native vegetation. This reduces habitat for migrating songbirds and other wildlife.

“Bart is the most accomplished woodsman in our little group,” said group leader Ed Conant. “Bart owns a tree farm in upstate New York, and he has skills with ropes. He also maintains our saws and leads the group when I am out of town.”

A little over a year ago, in its tenth year of operation, the group felled its 50,000th tree. The Tallow Terrors meet every Monday morning and remove tallows throughout the island, including private property, at no charge to the homeowner. It operates in cooperation with The Landings Association Public Works and The Landings Club. But that work is coming to a halt.

The group shuts down for March and April because it is nesting season. Homeowners should similarly be advised to postpone tree work during nesting season, and cautiously inspect branches before trimming any hedges or trees during the spring and summer months.

The tallow can be identified by its two-to-three-inch heart-shaped leaves. The Georgia Wildlife Federation calls it one of the greatest threats to habitat in South Georgia. The trees, also known as Popcorn trees, are prohibited at The Landings under The Landings Association’s Architectural Guidelines and must be removed immediately upon discovery.

For more information about the Tallow Terrors or other Skidaway Audubon projects, visit skidawayaudubon.org. 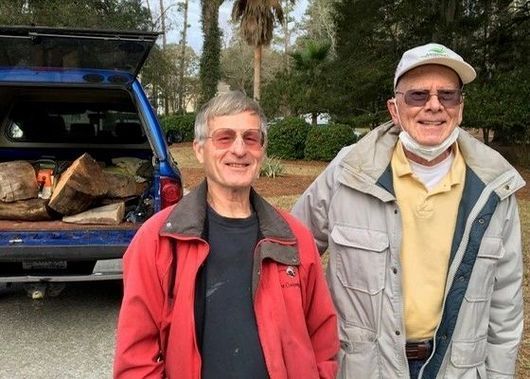 Tallow Terrors founder Don McCulloch (right), came out of retirement to bid farewell to 10-year volunteer Bart Davis (left) during his last outing with the  group.

This article was originally published by The Landings Association on their website. Visit landings.org to read the original article. https://landings.org/news/2021/02/25/volunteer-departs-tree-work-hold