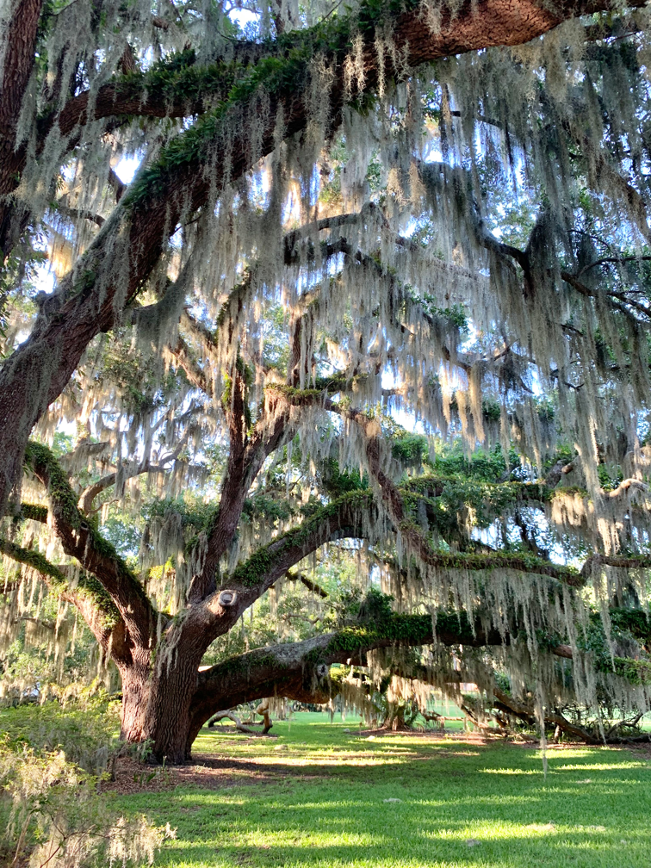 When one conjures up an image of “The South,” visions of large, old, oak trees draped with Spanish Moss come to mind. And it should, as this is so much a part of the South that has been ingrained in us. Spanish Moss also is commonly used in tourism ads from Virginia to Texas. Our home, Skidaway Island, is the perfect showcase for this image, with abundant Live Oak trees adorned with Spanish Moss. We know what Live Oaks are, but what exactly is Spanish Moss?

Spanish Moss is a plant native to Mexico as well as Central and South America. It is a member of the bromeliad family, the same plant family as pineapples and a wide variety of 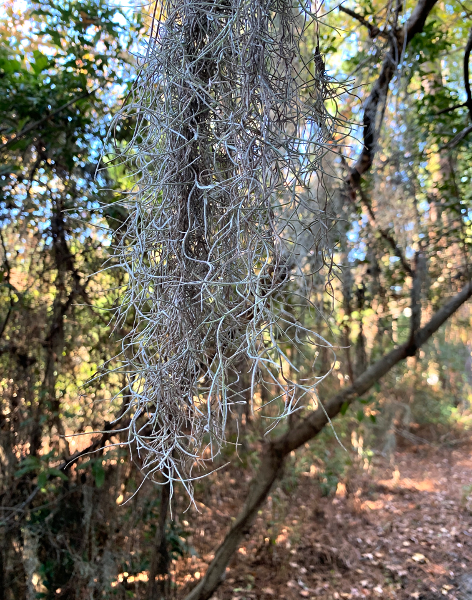 succulent house plants. It isn’t a moss of any kind. Often found in trees (favoring Southern Live Oak, Bald Cypress, and Longleaf Pine), it is very rarely harmful to trees, using them only for support. These trees have a high rate of foliar mineral leaching (they exude calcium, magnesium, potassium, and phosphorus), providing life-giving nutrients to the plant. Moss also can colonize on other trees, such as Sweetgums and Crepe-Myrtles.

At one time, Spanish Moss was cultivated for blankets and insulation. But those uses have long since vanished. However, some birds, including Orioles and Yellow-throated Warblers, find it a perfect medium for nest building, as do bats. (No need to be afraid of bats, as they feast on many of the insects that irritate us to no end.) Bats may hide in dense clumps of Spanish Moss during the day, and an oriole nest was found in Spanish Moss this summer along one of the golf courses. So if you happen to see these clumps, please do not disturb them!

Spanish Moss is propagated by seed and by fragments that are windblown, sticking to tree branches. It also can be carried to another location by birds transporting nesting material.

About 40 years ago, I was told never to touch Spanish Moss because it contained insects that could bite. But the chiggers I was warned about usually don’t inhabit moss in trees. It may accumulate in Spanish Moss when it falls to the ground and remains there awhile.

Spanish Moss, which grows fairly quickly, can be trimmed if it interferes with where you walk around your home. But there is no need, or reason, to remove it. There could be a bird’s nest hiding in the moss.

Keep Spanish Moss a part of your naturescape, and along with the birds, enjoy this iconic feature of our region. It adds charm to our homes, is a visual delight, and is useful to our feathered friends and other wildlife. 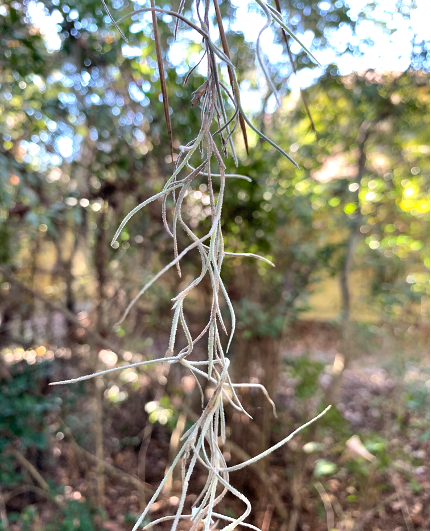 This article was originally published by The Landings Association on their website. Visit landings.org to read the original article. https://landings.org/news/2021/01/06/spanish-moss-iconic-treasure%C2%A0