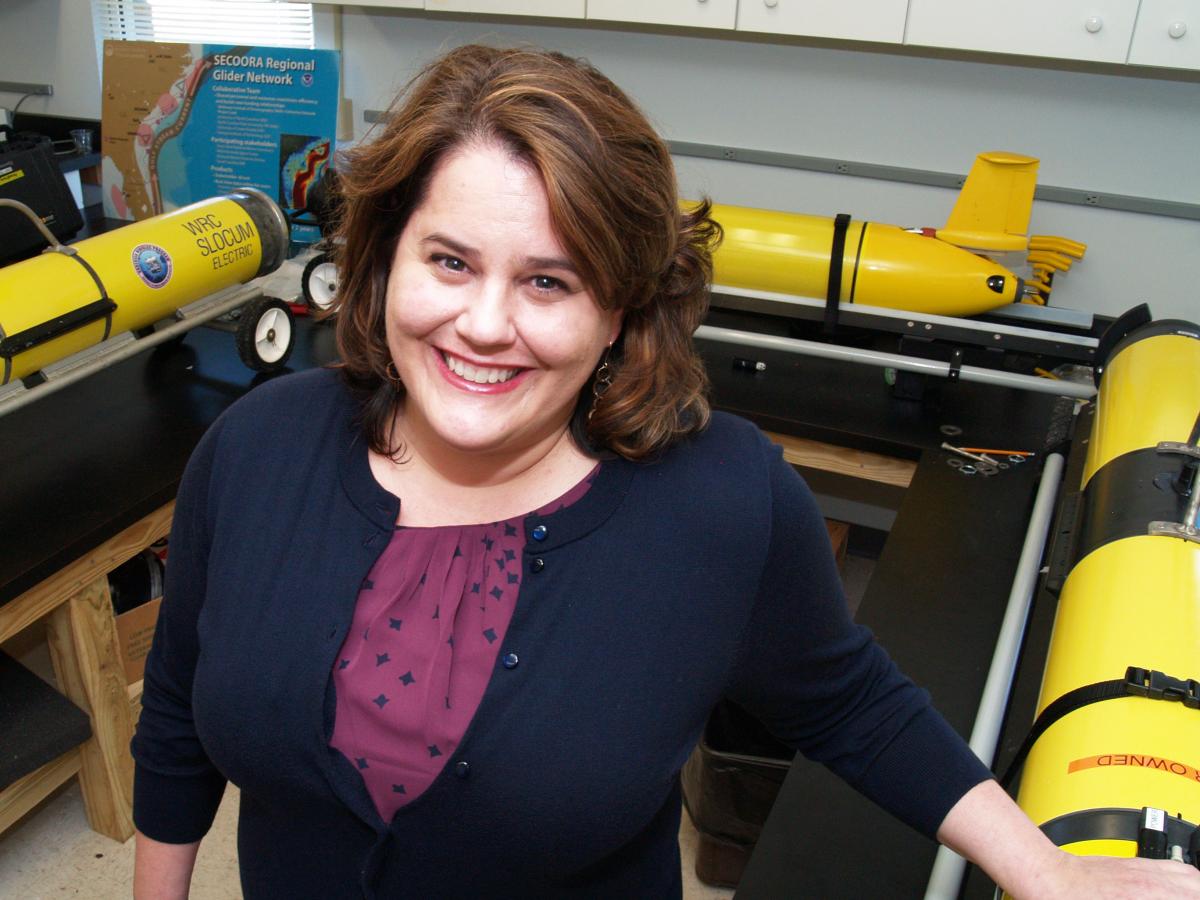 The U.S. Navy and the University of Georgia Skidaway Institute of Oceanography are teaming up to track hurricanes. The collaboration is part of a larger project that includes the University of North Carolina-Chapel Hill, the University of South Florida, and the Southeast Coastal Ocean Observing Regional Association (SECOORA) to maintain a continuous stream of autonomous underwater vehicle missions off the southeast United States’ coast. The AUVs, also known as “gliders,” contribute to improved storm forecasts by measuring the heat available in the ocean to fuel storms and make that data available to the models used to predict storm intensity. Gliders are torpedo-shaped crafts that can be packed with sensors and sent on underwater missions to collect oceanographic data. The gliders measure temperature and salinity, among other parameters, as they profile up and down in the water. Equipped with satellite phones, the gliders surface periodically to transmit their recorded data to base stations on land. Since they move through the water by adjusting their buoyancy instead of using a traditional motor and propeller, they require very little power and can remain on their mission for days or weeks at a time. “We set off with a bit of an ambitious target of deploying a glider at regular intervals off of Cape Canaveral, Florida and then letting it swim all the way up the edge of the Gulf Stream to North Carolina,” UGA Skidaway Institute scientist Catherine Edwards (shown above at left) said. This year’s project got a boost from an extremely rare contribution from the U.S. Navy – a loan of two of its gliders. “That is something that is extremely unusual, made possible by a collaboration the Navy, NOAA, and academic partners like Skidaway have developed over the past year,” Edwards said. “We received these two gliders to deploy and recover, and help the Navy piloting team by providing them some guidance on piloting them through the Gulf Stream currents.” The heat content of the ocean serves as fuel that feeds hurricanes and may determine whether a storm weakens as it approaches land or strengthens, as Hurricane Laura did dramatically recently. As it approached the Louisiana coast on August 26, Laura strengthened from a category one storm to a category four in less than 18 hours. While satellites do well measuring surface temperature, they are not very effective determining the conditions in the rest of the water column. By flying up and down, the gliders measure temperature and salinity changes from top to bottom. They can show if the heat at the surface extends all the way to the bottom, or if it is stratified with cooler water below the surface. If a hurricane mixes up cooler water from below to the surface, it can serve to weaken the storm. The gliders are programmed to surface every four hours and, using the satellite phones built into their tails, report their data to shore and then into national and international data repositories. The Navy assimilates this data into its operational ocean models, and the data is available for scientists, partners, and the general public to access the information within hours of measurement. “It can get pretty rough out there, but the gliders do great,” Edwards said. “They have a lot of buoyancy built in their tail, and as long as they can get that tail out of the water, they can get clear communications to shore.” The glider data serves both short-term and long-term goals. Because the gliders update so frequently, their data is available for assimilation into current storm forecast models on a near-real-time basis. In addition, the data also serves the larger scale mission of learning more about the relationship between the ocean and the atmosphere. Edwards calls the gliders the weather balloons of the ocean. Every day, thousands of weather balloons are released to collect data for weather forecasts. She says that gliders do the same for the ocean. “Hurricanes show how important the connection between the ocean and the atmosphere is,” she said. “I think there is a growing awareness that the ocean-atmosphere connection is important for weather predictions overall. From hurricanes to strong winter ‘bomb’ cyclones, even places far from the coast have weather that is driven by the ocean.” So far this season, the gliders have been well-positioned. For example, Hurricane Isaias was very difficult to predict, but at one point it was tracking directly towards Savannah. “We had two gliders in the water at that time, and I tell you, the track literally went directly over our two gliders,” Edwards said. “It also went over a number of other gliders near Puerto Rico and the Virgin Islands. I joked that Isaias looked like PacMan. He was trying to eat up as many gliders as he could on his path.” Edwards praises her co-chief scientists, Harvey Seim from the University of North Carolina and Chad Lembke from the University of South Florida. She also credits the team of 17 glider pilots among the three institutions who direct the gliders on an hour-to-hour basis. “This is a really ambitious project to deploy as many gliders as we have a fantastic team to pull that off,” she said. “It’s the team, and how we work together, that has made this so much fun.” The biweekly deployments will continue through the rest of hurricane season, providing real-time data along the length of the southeast Atlantic coast. 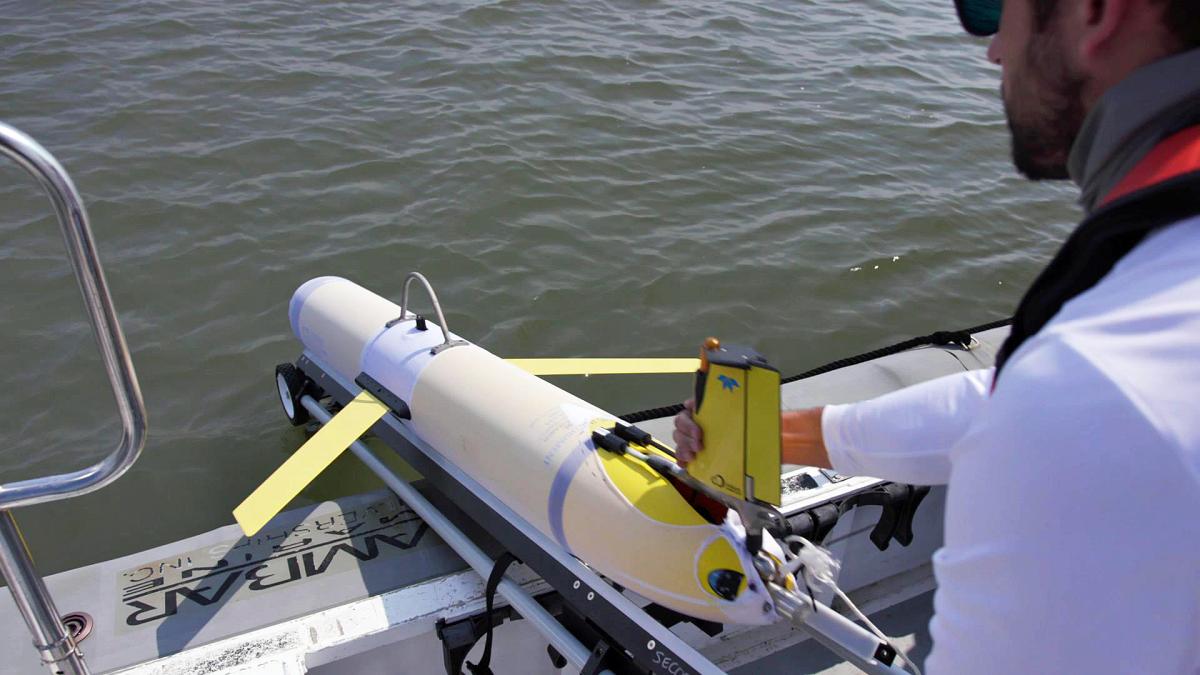 This article was originally published by The Landings Association on their website. Visit landings.org to read the original article. https://landings.org/news/2020/09/17/uga-skidaway-institute%C2%A0underwater%C2%A0gliders%C2%A0contribute-%C2%A0hurricane%C2%A0forecasts%C2%A0