On August 6, a vehicle hit the barrier arm at the Oakridge Gate.  In-house staff removed the error code and restored operation to the barrier gate arm; however, the fault/error code returned several times over the weekend and the gate arm became inoperable Monday afternoon.  Remote Technology, our current service provider, was onsite Monday and determined that the gear box was damaged from the impact of the vehicle.  Remote Technology ordered a new gear box which is anticipated to be installed by the weekend.  During this time, the slide gate is operating as the barrier arm until the gear box is installed.

As stated last week, twenty-one street signs were vandalized throughout the community.  Over the weekend, additional street signs, speed limit signs and directional signs were damaged and/or removed from their designed location. As a result, staff continues to repair, replace, and construct signs for installation in Tidewater, on Yam Gandy Road and Delegal Road. Nine additional street signs will have to be reproduced and installed on the following roads: Prescott Lane (2), Lakewood Court, Crooked Creek Lane, Old Hickory Lane, Wishmoore Retreat, Bent Tree Circle, Sounding Point Retreat and Willow Oak Circle.  Several community path stop signs were also damaged and had to be replaced along with several other directional signs in Tidewater.  It costs approximately $135 to construct a street sign, with an additional $60 in labor.  Over the last 2 weeks, the street sign vandalism has cost the Association more than $2,000. 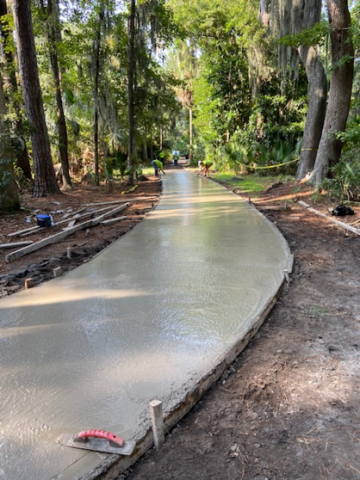 Absolute Concrete continued with the 2020 community path project this week with the conversion of path from Huntingwood Retreat to Cotesworth Place scheduled to be completed this week, thus completing this year’s community path project.  Next week Absolute Concrete will begin the installation of curbing around the front gate as part of the main gate road repair project.

Staff was notified about a fish kill in Lagoon 63 early this week, responded to the incident, and continue to monitor the lagoon to ensure that additional turnover has not continued.  Fish kills typically occur due to weather related stress like that experienced over the past several weeks. This stress is the depletion of oxygen in shallow water bodies and occasionally results in fish kills within the lagoon.  Staff will continue to monitor this lagoon and several others that tend to turnover when we experience an extended heat wave.

This article was originally published by The Landings Association on their website. Visit landings.org to read the original article. https://landings.org/news/2020/08/14/public-worksworking-you