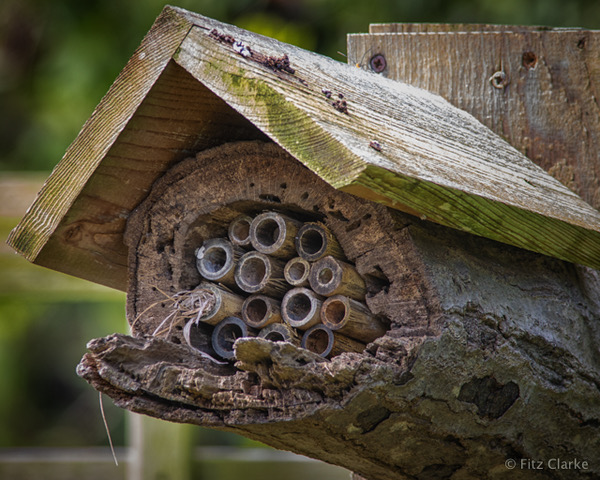 Big and beautiful, butterflies are welcomed visitors to any garden. But what about bees and wasps? They have stingers and resemble 1950s sci-fi movie aliens. 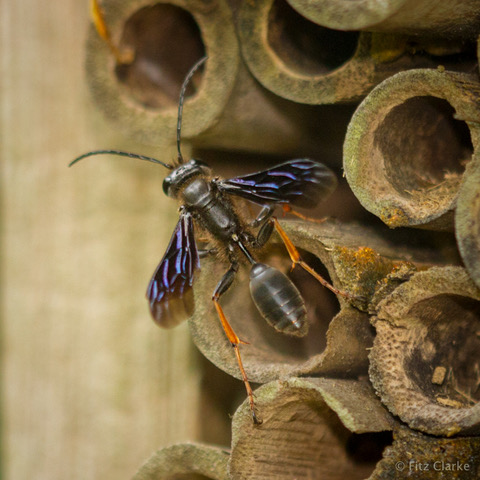 Of all the pollinators, bees and wasps are perhaps the least loved and most misunderstood. In actuality, they are a gardener’s best friend and the backbone of the food industry.

Unfortunately, over the past 30 years, pollinator populations have declined significantly, according to the USDA. The losses are attributed to disease, pesticides, and habitat loss. While scientists research disease solutions, residents are being encouraged to increase habitats for pollinators.

Accordingly, Skidaway Audubon’s pollinator garden at Sparrow Field now includes pollinator nesting cavities. Made of bamboo, the structures’ main occupants are Brown-legged Grass-carrier wasps. Known as gentle pollinators of summer flowers, these wasps are not aggressive and do not defend their nests.

Grass-carrying wasps do not make hives but live solitary lives. With energy from plant nectar, females chew off grass blades, fly them home, then stuff them in the bamboo cavities where their wasp larvae will grow. Females hunts crickets, sting them to immobilize them, and carry them into the cavity to nourish their young.

Unlike paper wasps, yellow jackets, and hornets, which are aggressive and will sting if they believe their nest is in danger, female grass-carrying wasps usually sting only if their space is badly invaded…for example, if it lands in your shirt and you press it against your body. The males do not have the ability to sting.

These wasps are slightly more than half an inch long, with black heads and bodies, and medium brownish wings with an iridescent blue sheen. They are most commonly seen in July and August and can be found East of the Rockies from Canada to South America. To attract them, bundle 10-inch long hollow stems with twine, and place horizontally aboveground near flowering plants.

Landings resident Fitz Clarke, who has spent many years expertly documenting the birds, butterflies, dragonflies, and other pollinators on Skidaway Island, built the bamboo huts. He has been photographing the busy bees, more precisely known as the Isodontia auripes wasp, a thread-waisted wasp in the family Sphecidae. Since 2009, Clarke has identified 55 different wasp species at Sparrow Field.

Skidaway Audubon’s pollinator garden at Sparrow Field, located off Bartram Road, is a showcase of plants that attract all kinds of beneficial insects. It is one of several environmental initiatives run by the all-volunteer 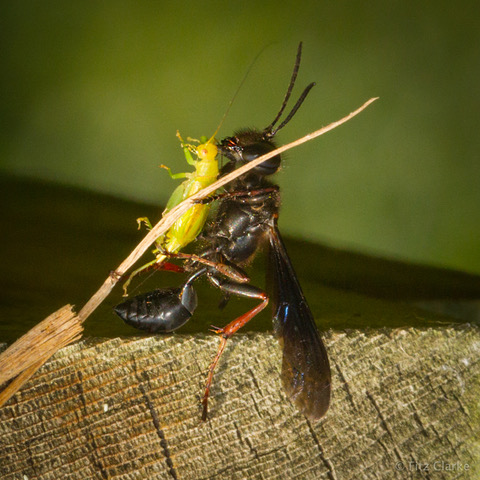 This article was originally published by The Landings Association on their website. Visit landings.org to read the original article. https://landings.org/news/2020/07/22/bees%C2%A0-gardener%E2%80%99s-friend%C2%A0