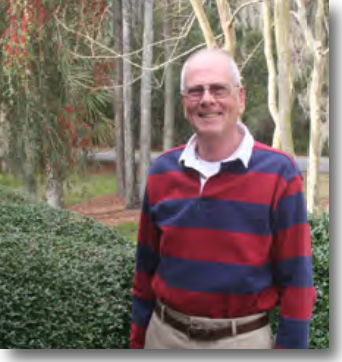 After 21 years as an avid Landings volunteer, Don McCulloch is handing over his chain saw and protective gear and embarking on a second retirement, this time to the Marshes of Skidaway.

Former recipient of the 2010 Landings Association’s Volunteer of the Year award, McCulloch is perhaps best known for his work with the Tallow Terrors. He and his fellow Tallow Terror teammates have, for years, spent countless hours eradicating the island of the invasive tallow tree. As if fighting tallows were not time-consuming enough, McCulloch also is one of the founding members of Neighbors Helping Neighbors (a group that provides assistance to residents who are temporarily infirmed), a longtime volunteer of the Landlovers’ Flea Market, and has donated time to the local Veterans Administration in greater Savannah.

Always modest about his busy schedule, McCulloch once told The Landings Journal that nothing he has done as a volunteer could ever have been accomplished without the help of many others.

“I don’t think I’ve done that much as an individual as opposed to my work in groups,” he said. “To me, my award as the 2010 Volunteer of the Year as well as my other successes are all group efforts, and I share all kudos I receive with my comrades.”

It was this camaraderie and love of teamwork that drew McCulloch to join various organizations within the community soon after his arrival in The Landings in July 1999. A former Chemical Engineer with Shell Oil Company, he said he was told by his cousin that The Landings was the best community in the entire Southeast.

“I was very pleased to find this is such a great place to do volunteer work,” he said. “So many people are eager to get involved and are great to work with. This is very beneficial to The Landings as well as the Savannah area.”

At the time we interviewed McCulloch, he estimated he volunteered between15 and 20 hours per week. He admitted it took a black book and several sets of notes to get him to his scheduled appointments but said he wouldn’t have it any other way.

“When I first moved here, I tried my hand at golf,” he said. “Although I still love the camaraderie of the sport, I found I was better suited for volunteer work. I like helping people, and I get lots of satisfaction from giving back.”

As much as McCulloch is modest about his contributions to the community, those who work with him cannot say enough about the man who touched their lives and their hearts with his giving spirit and upbeat attitude.

“It’s hard to summarize the enormity of both my feelings for Don and his contributions to the residents of The Landings,” Ann Fenstermacher said. “His ‘can do’ spirit, coupled with his thorough attention to detail and reliability, made him a dream to work with. Without his leadership and commitment to the Tallow Removal Project, Skidaway Island would not enjoy the same degree of beautiful diversification as it does today. I am certainly a better person for having known and worked with Don.”

Ed Conant, who worked with McCulloch as a Tallow Terror, agrees with Fenstermacher that his contributions to The Landings have been exemplary.

“As the first leader of the Tallow Terrors, Don established the culture, procedures, and work ethic that has led to the elimination of 52,000 invasive Tallow Trees on Skidaway Island in the past 10 years,” Conant said. “The vast majority of these trees were on TLA, TLC, and private properties within The Landings. He is always well organized and had the saws, herbicide, loppers, ropes, and other equipment in top condition ready for use. He is highly respected among the Tallow Terrors for his exceptional leadership, as well as being a good friend. After his retirement from the Tallow Terrors, he has been our ‘Leader Emeritus’, providing an excellent example of community service for all to emulate.”

Leading by example, attention to detail, great organization skills, and a true people person are central themes you hear from most people who have worked with McCulloch when asked to describe him. Callie Ryan, a resident and Landlovers Flea Market volunteer, recalls with great fondness the times McCulloch served as Box Chair for the Flea Market. It is important to note that times is plural, as McCulloch did the job with such excellence it was only natural that they asked him to be Box Chair in future years.

“His job was to collect enough moving boxes for all the items donated at intake to be packed and loaded into the Go Minis,” Ryan said. “Don left nothing to chance. Each year, he kept a detailed spreadsheet on how many boxes by size he collected for the Flea Market and also counted after intake how many boxes were not used. Moving boxes come in multiple sizes, and he would have piles in a huge trailer lined up by size -- nothing random and nothing out of order. Being an engineer, his attention to detail was classic. I loved working with him!”

“Don is such an extraordinary volunteer,” Gensamer said. “By his example, I have learned what volunteering in The Landings is all about. His commitment, integrity, and caring attitude are truly amazing. I feel fortunate to have been invited by Don and Caryl Warner to become a Call Coordinator for NHN, and I was truly honored when Don asked me to take his spot as Co-Chair. I am relieved and pleased that Don plans to continue as a NHN volunteer (for transportation requests) after he moves to The Marshes.”

Caryl Warner, a longtime resident and friend of McCulloch, has had the honor of volunteering with him in several different capacities. Their first duo volunteer detail was on the Association’s Covenant Compliance Committee, and later they crossed paths on the Bay Tree Brigade. Neighbors Helping Neighbors, and most recently the Association’s R-3 (Reduce, Reuse, Recycle) Committee.

“Don and I have worked together for approximately 15 years for the Landings community, in addition to the large amount of work each of us has done individually,” Warner said. “We have each been rewarded from a publicity and plaque standpoint. But the real reward for me, as I am sure it is for Don, comes from that inner feeling of a job well done.”

Landings Association General Manager/COO Shari Haldeman said, “While I know he’ll just be next door at The Marshes, Don McCulloch will be sorely missed. I thoroughly enjoyed our visits together over the years discussing various initiatives he implemented. Don leaves behind a legacy of volunteer excellence and inspiration.” She added that she is inspired by all of the volunteerism that takes place in The Landings and the volunteers like McCulloch who make a choice to impact positively the community and shape its character.

“These individuals exercise responsibility and accountability, and consistently demonstrate their commitment to making a difference,” she said. “They truly are the foundation of our community, and we cannot celebrate them enough. The Landings is a unique place that is steeped in a culture of giving back to the community and leaving a place better than you found it. Don McCulloch is the epitome of this giving spirit. The positive work he has done in The Landings not only benefits those of us here now, but it also will benefit future Landings generations to come. My deep gratitude and thanks to you, Don, for giving so freely of your time and talents. I wish you and Margaret the very best!”

This article was originally published by The Landings Association on their website. Visit landings.org to read the original article. https://landings.org/news/2020/07/09/landings-pays-tribute-longtime-resident-don-mcculloch%C2%A0