On Wednesday, April 29, Landings Security and Chatham Emergency Services (CES) responded to a residence on Yam Gandy Road for a report of a fire. Upon arrival, CES personnel discovered the dishwasher was on fire. The fire was extinguished, and the equipment was removed from the home. There was no further damage, and no injuries were reported.

On Wednesday, April 22, a resident contacted the Main Gate to report a theft. The resident owns a landscaping company, and he noticed that a blower and a hedge trimmer were missing from his enclosed trailer that afternoon. He advised that the items were last used that morning while performing work on Water Witch Crossing. Although the resident suspected who may have taken the items, he did not have proof, and therefore, did not wish to pursue the matter any further. The missing equipment is valued at approximately $1,000.

Landings Security responded to a residence on Windlass Court for a report of theft on Monday, April 27. The resident advised Security that his front door mat was stolen from his residence sometime that morning after 10 a.m. He further advised that no one had been to his home that day except for the waste company. The mat is valued at approximately $65.

While performing a routine patrol at the Kids’ Fishing Lagoon on Monday, April 27, Security noticed that a bench had been vandalized. It is unknown when the vand 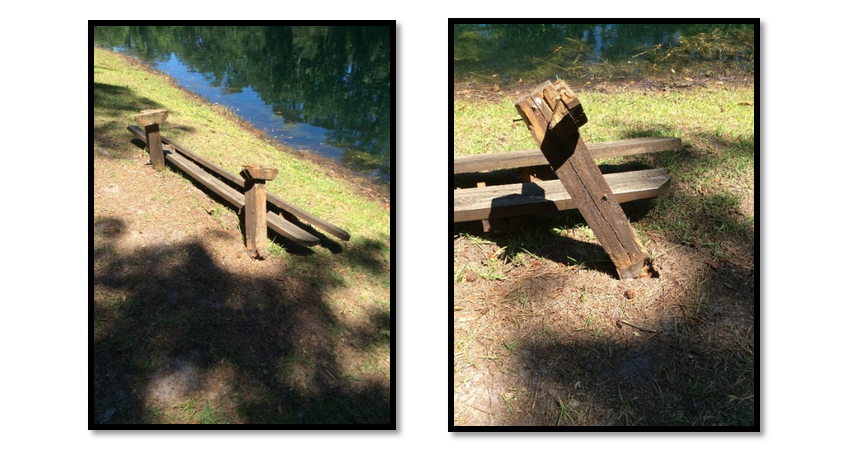 alism occurred or who may have done it. Public Works staff was notified so the bench could be repaired. Patrols in the area have been increased due to prior incidents and will continue.

On Thursday, April 23, Security responded to a residence on Franklin Creek Road South in reference to a suspicious incident. The resident advised that she discovered an unknown vehicle parked in her garage upon returning home. Security made contact with the vehicle’s owner who stated that he thought the home was vacant and believed it would be okay to park there. The two parties did not know each other. The man removed his vehicle from the garage, and the issue was resolved between both homeowners.

Security responded to Wild Boar Crossing on Monday, April 27, in reference to a call concerning writing on the community path at Landings Way South and Wild Boar Crossing. Upon arrival, the officer noticed a derogatory statement regarding law enforcement written in chalk on the path. The officer poured water on the chalk to clear it. It is unknown who wrote the statement or when it was written.

This article was originally published by The Landings Association on their website. Visit landings.org to read the original article. https://landings.org/news/2020/05/01/security-scene